Home » Rugby League » 4 Points: Can Grundy rise again or is he all tapped out?

Port Adelaide's Charlie Dixon watched and waited. The boundary umpire threw the ball in, and Magpies' Brodie Grundy ran unimpeded towards it, knowing he had free first access, and double palmed it straight to his feet.

Scott Pendlebury might have been a chance to salvage the moment and gather the ball on the half-volley but he was partly bumped off line and it pitched and bounced away from him. 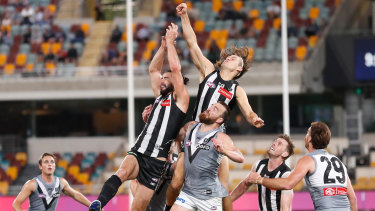 Off centre: Brodie Grundy (left) goes up in a contest with teammate Darcy Moore and Port Adelaide’s Charlie Dixon.Credit:Getty Images

Dixon had held himself back to trail cunningly in behind Grundy, seemingly predicting the likely flow of play and decision of the Collingwood ruckman not to hit the ball to anyone in particular. He swooped on the loose ball, gathered and snapped a goal.

It was an illuminating moment. Grundy's tap work is so predictable now that a forward, non-ruck could accurately anticipate what he would do. With free access to the ball, Grundy regularly seems uncertain about what to do with it, so he does nothing. He drops the ball to his feet.

When he was playing well, like last year, this often meant Grundy would be the one to gather the ball and clear it from the contest. Presently he is not playing well. So now the ball falls to no-one, no advantage is gained, his team does not get first use, and in fact, the opposition often sharks it better than Collingwood does – just as Dixon did.

This problem was most glaringly evident in last year's preliminary final when Collingwood's hitouts and clearance numbers wanted nothing to do with one another.

Grundy said he had learnt from that experience in the off-season and responded in round one against Tim English with an authoritative display, but the rest of his year suggests more is education needed. From being a great asset and point of difference, Grundy has been mediocre.

Admittedly, he has not looked fully fit for most of the year. This does not explain why when he is offered the opportunity to palm the ball to someone, he drops it to his feet, but in terms of Grundy's total game, he has not looked comfortable. He plainly avoided kicking the ball in several late-season games and has not moved around the ground freely.

Grundy's best asset when fit is that he acts as an midfielder. He has not done that this year. He has looked like he should have been better rested. 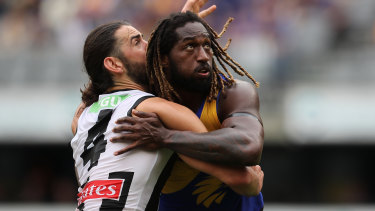 Now he faces the man who has replaced him as the All-Australian ruckman, West Coast's Nic Naitanui. If Collingwood is to have any chance of defeating the Eagles in the elimination final, Grundy has to be better.

He has always struggled in the hitouts against athletic, high-jumping rucks, and so Naitanui presents a significant problem for him at stoppages. But Grundy, after the bye and hopefully fresher, needs to compensate for the hitouts and run Naitanui off his legs.

STAN THE MAN FOR GEELONG

Esava Ratugolea or Lachie Henderson? That is the question. Assuming Rhys Stanley is fit to play after his groin complaint it is likely the Cats would bring in the ruckman, and therefore release Mark Blicavs to return to … well, to pretty much anywhere really, but most likely to defence. 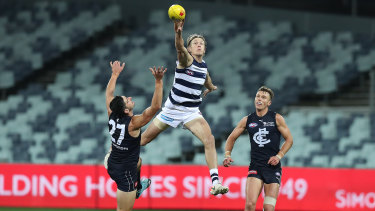 The big man flies: Rhys Stanley in action for Geelong against Carlton in round 3.Credit:Getty Images

The question then is: who goes out of the team for Stanley to come in? For me it would be Lachie Henderson out with Blicavs dropping back into defence, so maintaining the structure. There is some suggestion that Ratugolea gets in Tom Hawkins' way, and that he should go out for Stanley, but I think Ratugolea is an asset as a linking high half-forward and second ruck.

Patrick Dangerfield in attack leading from deep forward – if they can afford the luxury of not using him on the ball – creates that additional uncertainty in the forward line that could be the Cats' point of difference in finals.

TIGERS SET TO POUNCE ON LIONS

Peggy O’Neal is right: this will be the hardest flag of all. For any club a flag this year would be a remarkable achievement, but a third in four years for the Tigers would be especially so after this season of setback, dislocation and distraction.

Mercifully for Richmond, the campaign commences against Brisbane, which is as kind a draw as the Tigers could have hoped for in finishing top four. This sounds unkind, but the head-to-head battle with Brisbane produces look-away-now statistics for Lions fans, who would have preferred any other opponent in the finals.

That is especially true given one of their best players, Harris Andrews, has a hamstring injury worse than Tom Lynch's, the man who would be his opponent. So the two players who would ordinarily play on one another both have hammies and remain questionable for the game.

Andrews' was worse and could rule him out, whereas Lynch – sitting bang on the 21 day recovery period for a regular hammy – is more likely to play. If the stats didn't already point to a Richmond win, then that little selection in and out would sway it.

Brisbane's problems are at the other end. Richmond stop them scoring, or more pertinently stop them scoring accurately. They've kicked 8.17 and 4.17 the last two times the teams have played. Yes, that is on them but it is also something about the way Richmond defend against them.

WING AND A PRAYER FOR SAINTS

The biggest challenge for St Kilda would appear to be overcoming their own mental hurdle as much as the Bulldogs. That is not meant to denigrate the Dogs, but St Kilda has fumbled key moments in the back end of the season when they should have made sure of their finals berth.

That loss to West Coast – an injury-depleted team that then lost more players to injury – after they were leading in the last quarter leaves a lingering feeling of uncertainty about the Saints when it comes to seizing their moment.