Oddly, the discussion with North bosses Ben Buckley and Carl Dilena was not about coaching, but it was that conversation that created the change in coach. 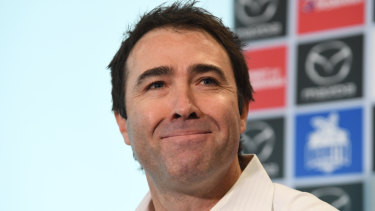 The discussion was really about the Kangaroos' list management strategy. And what we know now from Sunday's press conference is that the Scott departure is only the beginning of the overhaul at North.

North Melbourne this year had a type of epiphany. The plan to top up mid-range draft picks with top -range players did not work. They could not attract a top-range player to go with the mid-range picks.

Instead they were left with a flawed strategy of topping up mid-range draft picks with mid-range imports. As a consequence, they got stuck in a wheel of mediocrity.

After the loss to Sydney in round 9, when it was apparent the Kangaroos were no longer treading water but starting to sink, they had the conversation.

This led to Scott’s offer to leave, and so clear a path for the appearance and reality of complete renewal and change.

It’s an odd thought that a 10-year coach who those inside and outside the club agree is a good coach could by seen to be doing the right thing by them by leaving. Ordinarily a coach of Scott’s CV would be the sort of coach North would be looking for. Doubtless after ten years there were things that annoyed both club and coach about each other.

What is apparent after Sunday’s press conference is that Scott’s departure will herald significant other list and management changes.

North has tried the top down approach to its list and it didn’t work. (No one could accuse them of not trying to bring in big-name players). It will now try to build from the bottom up with draft picks. The only way to do that is to trade for those draft picks.

So consider every player who has currency in the trade market and ask whether the club would be better off keeping them or using them for a draft pick. There is not an extensive list of names that have currency so the names are obvious and none is off limits for consideration. That is not to say they are all likely to be go but plainly to get a valuable draft pick or two in you have to be prepared to let a valuable player or two go out.

You cannot trade young stars, or what is the point? Forget about trading the likes of Luke Davies-Uniacke and Tarryn Thomas. So, it's players like Ben Brown, who is 27 in November (he came to the game late), who would have an appeal for other clubs.

Ben Cunnington turns 28 next month. He is a player of obvious appeal as a tough first hands player but is he a player who would hack at the fabric of the club ere he to leave?

The older players now will be asking themselves whether they should stay at the club and slog through the rebuild, or go elsewhere in the hunt for late-career success. 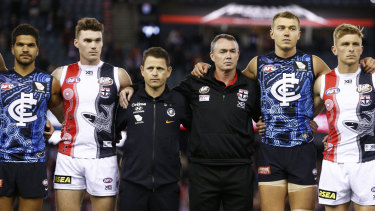 The Saints have exceeded expectations, especially with injuries. Presently only percentage separates them from a place in the top eight. There was more downside for Richardson from a loss on Sunday than for Bolton.

For Bolton, the Scott news is unsettling. His team offered a spirited response on Sunday and looked better but still could not win. They flew the flag, they played with intensity but still lost.

The Blues’ management may have wondered ‘but who else is there out there?’ when they contemplated a change of coach. Now at least they know one name.

The mounting Essendon losses, especially those against top four teams, has also drawn John Worsfold’s job into question. This in one sense is unfair given the deep injury list this year.

The problems of not being competitive against the top four teams have been going on for a long time, but they recruited to change that this year and have not had their best team available.

The third strike should be the final one for Gary Ablett when it comes to his flirting with the tribunal this year.

His punch on Saturday night could not be argued away as clumsiness in the play. He threw a punch and it landed. Ablett's only defence will be minimal or insufficient contact to the jaw of Gold Coast Suns player Anthony Miles. As Ablett's teammate Tom Hawkins can attest, when it comes to jumper punches this defence has not always held. 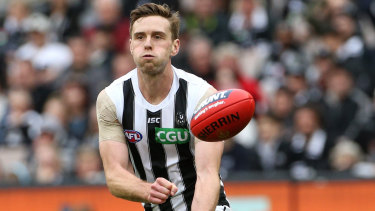 No Lynden Dunn, no Darcy Moore, no Tom Langdon, no Matt Scharengerg. Tyson Goldsack playing forward again in the VFL.

On Friday night Roughead played on and beat Buddy Franklin. Admittedly, Franklin didn't look especially fit in his first game back but Roughead got the best of him. He has been quietly effective all season, winning his position most weeks, but Friday night was his best game.

At trade period he fell in Collingwood's lap when West Coast, who had been discussing a much bigger contract offer with him, instead went for Tom Hickey at the last minute.

As one football insider noted, there are shades of Brian Lake about the Bulldogs player moving to a contention club. There was no suggestion he was poised to do a Lake and frank his trade with a Norm Smith Medal.

‘Not on the radar’: Worsfold slaps down talk of Hird return