Home » Rugby League » 4 points: Time for Carlton’s players to look in the mirror

After Carlton's cruel loss to the Gold Coast many will turn their attention to whether the Blues' coach Brendon Bolton should keep his job.

But, after watching the error riddled match decided by a Jack Bowes' snap with 13 seconds remaining, the question could well be why would Bolton actually want the job? 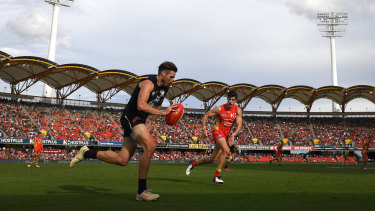 Still got the Blues: Carlton’s Dale Thomas races up the wing at Metricon Stadium on the Gold Coast as Suns’ Ben Ainsworth closes in.Credit:AAP

If this was the Married at First Sight commitment ceremony between Bolton and the Blues he would be half tempted to hold a card up with the word 'Leave' on it when the question came.

Bolton won't be thinking that way of course but the litany of mistakes Carlton made entering their forward 50 made a replay of this match a possible late addition to the Melbourne Comedy Festival.

That no-one was on the defensive goal line when Bowes' snap shot dribbled through after a battle for the ball was disappointing, the lack of concentration giving weight to the sense this Blues' team has forgotten how to win.

That the Blues repeatedly bombed the ball high to their smallest forward Michael Gibbons when they had Harry McKay, Charlie Curnow and Levi Casboult in their forward 50 indicated the team lacks composure, a quality harder to find as losses mount. 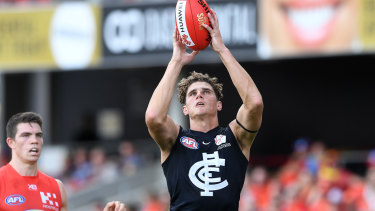 Target practice: The Blues must improve on delivering the ball to their tall forwards, including Charlie Curnow.Credit:AAP

That was enough to shave years off an experienced coach's life let alone one that has been in charge of a team only able to win occasionally for several seasons now.

The look on Bolton's face in the rooms post-game when Blues CEO Cain Liddle gave him a consoling pat on the shoulder showed how much the result meant to the coach who is giving everything he has to lead his team to victory.

His biggest test will be keeping his composure now as the critics find voice and some statistics begin to be relayed with monotonous regularity.

For the record they are three wins in the past 36 games and no score above 100 for 59 consecutive games but in reality those statistics mean little.

What is impossible to escape however is the fact the Blues remain the only team without a win in 2019 and Gold Coast, St Kilda and the Brisbane Lions have three wins next to their name.

The club will need to remain rock solid both publicly and privately in their belief that the wheel will turn with Andrew Russell's presence alongside Bolton a bonus while the wise old head of Robert Walls is also an important voice and ear for a coach whose confidence must be rattled.

Luckily Patrick Cripps is a star both on and off the field and Sam Walsh is performing as the No.1 pick but the somewhat defensive response last week from injured captain Sam Docherty to the notion the team has forgotten how to win is not the right tone to set.

The players must take responsibility for this loss because it was their decisions that cost the team a win, not the coach.

Not a natural media performer Bolton is a genuine person with an earnest desire to lead the young Blues to a successful era and to give Carlton fans the success they have been denied for most of this century. He has also improved markedly in this area as he attempts to bring supporters with the team and he never criticises his players.

But any coach in his position will need all the support he can muster from inside the club with president Mark Logiudice and Stephen Silvagni able to play a huge role in pacifying any old Blues with old Carlton instincts. 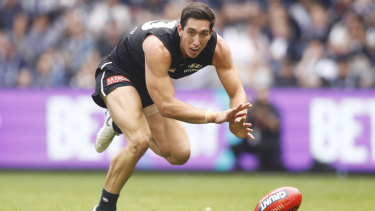 As a group they can point to all the change that has occurred with the playing list and the improvement that appears to have taken place in the first four rounds when Carlton has been in a winning position on each occasions.

Jacob Weitering was very good against the Suns and will be a player while Liam Jones, who was stiff not to be paid a mark late in the game, is now a reliable defender.

With two interstate trips out of the way they must regroup to attack a winnable game against the Western Bulldogs in front of their own fans at Marvel Stadium next Sunday.

From that perspective looking at Richmond's approach to their match this week against Port Adelaide will help.

Admittedly a much better team, the Tigers took a positive mindset into the match and embraced the challenge of being without their big four and it worked.

Of course it's easier when a premiership is in the cabinet but the Blues must keep their minds free otherwise dramatic change will be the only thing to propel them out of this funk they appear to be in.

For Carlton, this was a cruel loss, the type that used to derail Richmond's seasons in the bleak years but one that is now seen as a mere bump in the journey with the retained smile on the face keeping energy levels high.

While we're talking about a positive attitude, it's got the Suns this far. They believed they could win the game even when they lost the lead in the last quarter and Peter Wright dropped a mark in front of goal that Herschelle Gibbs would have swallowed.

Stuart Dew knows the fine line between success and failure and has been quite open that the Suns could also be winless after four rounds having won their three games by less than a kick.

Bolton needs to find a way to reinforce a similar message to his befuddled Blues so when the moment next arrives everyone is in the right headspace to win a match when it is there to be won.

Those of us who doubted whether Richmond could overcome the loss of their four stars against Port Adelaide underestimated Dylan Grimes. 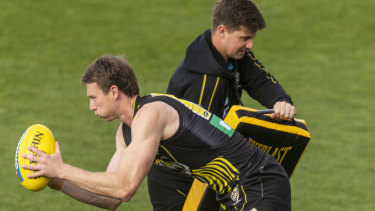 On the prowl: Dylan Grimes puts in the hard yards during a Richmond training session at Punt Road Oval.Credit:AAP

He has never polled a Brownlow vote, never been All-Australian and, let's face it, in recent times never been beaten.

Grimes' match-winning performance – albeit with one errant kick that led to a Port Adelaide goal – was football's version of Sri Lankan cricketer Kusal Perera's knock against South Africa early this year.

It's been a mighty effort from St Kilda to win three of their first four games, only a tight loss to the Dockers over in Perth blotting the copybook.

Without Jack Steven, Jake Carlisle and Dan Hannebery these Saints have been brave enough to stay positive and attack each week with the ferocity that became standard under Alan Richardson until last season's disaster. 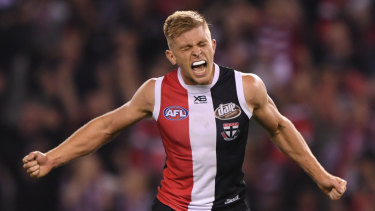 All Saints day: St Kilda’s Sebastian Ross reacts after the final siren in their clash against Hawthorn.Credit:AAP

They have refused to buckle when their shots at goal sprayed far and wide and now they head to MCG next Saturday with a winnable chance against Melbourne, a team they defeated late last season. It's too early to get lippy but with their skipper Jarryn Geary sidelined they rose to the challenge to beat the Hawks and deserve credit.

It was an astonishing display of football precocity from two New South Welshman, Harrison Himmelberg and Jeremy Finlayson, that put the Giants on the path to an historic victory in Geelong on Saturday. 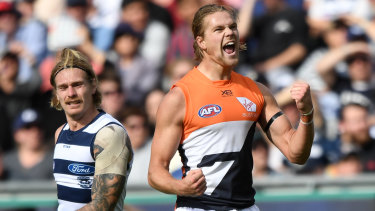 Giant strides: Harrison Himmelberg slots a goal for the Giants during their impressive win over Geelong in round 4.Credit:AAP

The pair that learned to play AFL just half an hour apart at the Mangoplah-CUE and Culcairn football clubs, two towns about a Slim Dusty album away from Wagga Wagga, were instrumental in the Giants claiming their first win at GMHBA Stadium and just their 11th win in 39 attempts in Victoria.

Whether that victory leads to something bigger for the club in September remains to be seen but if the trend after four rounds continue, this season could signal another twist in the story of football in the country's most populous state.

For the first time Greater Western Sydney look like being premiership contenders in a season when their hometown rivals, the Sydney Swans, might fall out of contention. The Giants would prefer the Swans to be contenders too but the season shapes as one of shifting focus up north.