Penrith star Tevita Pangai Jr may have a family to get back to after the season ends, but there’s something else he’s desperately missing in the Panthers’ bubble: the cooking of Quade Cooper’s mum.

Ahead of his club’s do-or-die preliminary final on Saturday, Pangai has opened up on his close relationship with the rugby star and the mentorship which has helped shaped the person he is today.

Pangai said it came as no surprise to him when Cooper was called up for an unlikely return to the Wallabies starting lineup for the first time since 2017.

“He’s like a big brother to me, so I knew all the hard work he had been doing,” the Penrith prop said. “He always talks to me every day about the daily grind and making sure you’re doing all the little things and trying to change not only as a football player but as a person, so I’m really happy for him.”

Pangai was given a close look at just how serious Cooper still is about developing his game this year when he was inducted into his ‘5am club’.

Pangai said membership of the club – in which an exclusive group of Cooper’s friends undergo tough 5am gym sessions, which are documented on Instagram – gave him an insight into what it takes to be a professional athlete.

“There are some good players here at Penrith, but he’s on another level with his professionalism,” he said. “Quade is always talking about training when you don’t want to. 5am is a pretty hard time to get up.

“You think you go to the gym and it’s going to be like 40 minutes, but with him, it’s two hours. He’s an unbelievable athlete and I respect him as a man.”

Last year, the pair’s friendship landed Pangai Jnr in hot water when he was stood down for breaching COVID-19 protocols by training with Cooper.

Under the NRL’s biosecurity bubble rules, Pangai was restricted to being around teammates, family and members of his household – which Cooper did not fall into.

Earlier this year, the Broncos told Pangai his services were no longer required, with the issues of 2020 cited. He signed a three-year $2.2m deal with the Bulldogs for 2022, with Penrith finding room under the cap to take him on for the remainder of the season.

Without Cooper in the NRL bubble, Pangai said Panthers teammate Isaah Yeo is the next best thing.

“He just invests a lot of time into his game and I’ve been asking him a lot of questions about what he does in the off-season just trying to pick his brain because he’s an eighty-minute player and that’s where I need to get to.”

As for after the season, Pangai will be headed straight back into the 5am club and into the kitchen of Cooper’s mother Ruhia Jones.

“They do a boil-up which is a traditional Maori dish, it’s nice as. It’s like this dough and meats,” he said.

“He and Sonny [Bill Williams] are great role models for myself and other young Polynesian players and Maori players coming up in the NRL, playing rugby league and rugby union.

“He’s just taught me what it takes to be a proper athlete, but also to be a good husband and be a good family man.”

How many times have England won the Rugby World Cup? When is next tournament?

Sonny Bill Williams on the hunt with Toronto Wolfpack 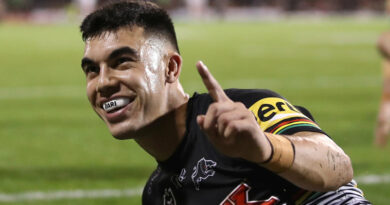 Why Staines can be the NRL’s next great fullback