Home » Rugby League » ‘A moment I wish I could have back’: Reynolds still kicking himself over grand final miss

Almost a week after the party had died down, a bleary-eyed Adam Reynolds sat down to watch a replay of the grand final – and that missed sideline conversion.

With just five minutes left on the clock in October’s decider, Reynolds had the chance to level the scores for Souths against the Panthers but dragged his kick just wide. Penrith hung on to win 14-12.

“I’ve only watched the replay once,” said Reynolds, speaking about the kick for the first time. “I waited until all the celebrations and our presentation was over. I wanted to watch it back and see exactly how close it was.

“I didn’t try to over-kick it. I put the ball where I wanted it. It’s just a moment I wish I could have back over, so I could take the kick again.

“I used to love grand final day because of the memories with 2014 and Souths [when the Rabbitohs ended a 43-year drought with victory over the Bulldogs]. Now there will be mixed feelings. No doubt there will be replays of that kick played in future years. I certainly won’t be watching.

“We spoke about it just before the grand final, how we wanted no disappointment or regrets. I certainly have no regrets, there’s just that disappointment it didn’t go over.” 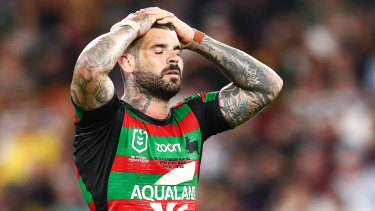 A heartbroken Adam Reynolds after missing a sideline conversion in the grand final.Credit:Getty

Reynolds also watched his last-minute field goal attempt from outside 40 metres, which could have forced the decider into golden point.

“That was a ‘Hail Mary’; it was a poor shot and I rushed it,” Reynolds said. “It’s my job to nail those kicks, but looking back there were plenty of things we could have done differently to win that game.”

Had Reynolds landed the conversion, and the field goal, it would have been a great fairytale farewell.

Souths fans who did not want the halfback to leave Redfern watched this week as the local junior pulled on Brisbane Broncos colours for the first time. It must have been how Wests Tigers fans felt when Robbie Farah pulled on the cardinal and myrtle of South Sydney, or when Cooper Cronk donned the Sydney Roosters colours after leaving the Storm.

Reynolds said he had been warmly received north of the border and already stopped countless times by locals to talk about the game.

“They’re definitely passionate about their footy up here,” he said.

Reynolds is not due back at training until next month. He knows his body needs the rest, but is also keen to check in on his new teammates.

He confirmed he had scans after the grand final following a tackle midway through the second half on Panthers co-captain Isaah Yeo. He thought it was a “stinger” and deliberately made the next tackle to make sure it was right, only to feel the pain kick in after full-time.

Reynolds welcomed the chance to play against Souths in the opening round of next season, with new Rabbitohs coach Jason Demetriou telling the Herald this week: “It would be great to tussle with the little wombat in round one. It would be great to have Adam in round one so our members and supporters can thank him for his outstanding contribution to the club over the years he was here.

“For Adam, it will be good as well to get the game out of the way, so he can then focus on what he’s doing at the Broncos. We need to play each other sooner or later, so why not round one?”

Reynolds, who refers to Demetriou as “Seibs”, a cheeky reference to former Souths coach Anthony Seibold, said of being one of the major storylines leading into the opening round next season: “Both teams will be looking to make an early statement. It will be good to go up against the boys and ‘Seibs’. I know the boys well and they know me.

“Souths fans have missed out on a fair bit of footy and it would have been great to play in front of them. I have a soft spot for them, they were a big part of my career and always will be. In saying that, I have a new supporter base up here and they have been great. Either way, it’s going to be an amazing atmosphere.” 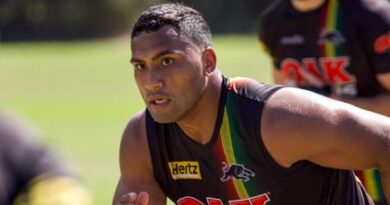