Home » Rugby League » A premiership blueprint: The numbers behind the Demons’ rise 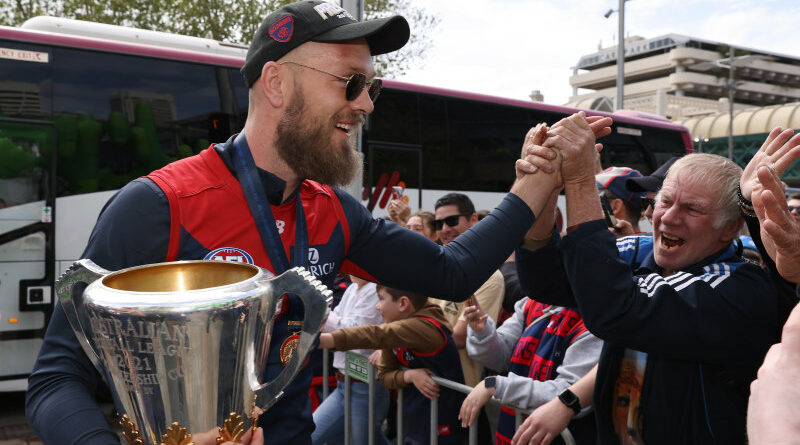 Heading into a winner-takes-all contest which ultimately ended a 57-year premiership drought, Jake Lever neatly described how his Demons had to handle the Western Bulldogs.

“I think if you are the last two teams in the year to play off in the grand final, you have got some threats across the ground,” the star defender said. 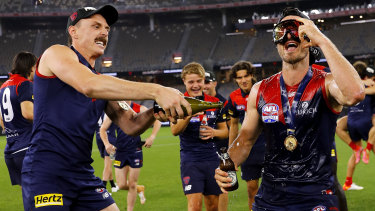 “For us, it’s about nullifying those [of the Bulldogs], but also playing our game. That’s something we haven’t shied away from all year – playing the Melbourne way. It has held up so far.”

That it did, engineering a 74-point win at Perth’s Optus Stadium – the biggest winning margin of any of the Demons’ previous 12 premierships.

So, what really was the Melbourne way? Put simply, it was a game built on pressure across the ground, winning the contest no matter how difficult, and adding a touch of brilliance when required. The latter was on show through Max Gawn’s five goals in the preliminary final, and Christian Petracca’s Norm Smith Medal-winning efforts on the grandest day of all, which included a brilliant dribbled goal from the left forward pocket in the third term.

“To have invested so much, [and] have sacrificed it with a group of boys … it’s a dream,” Petracca said later. 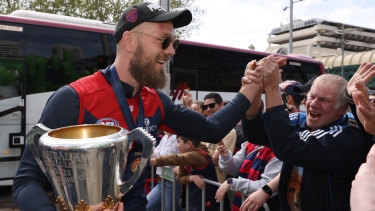 Max Gawn arrives with the premiership cup at the team celebrations the day after the grand final.Credit:Getty Images

That it was, but it was built on an unyielding game plan which stood the test of a long, difficult season but one which also yielded the minor premiership.

The game is all about having possession of the ball, and by winning the contested possession count on average by 12 per game – ranked No.1 in the league, according to Champion Data – the Demons reinforced that they wanted it more. In Clayton Oliver, Jack Viney and Petracca, the Demons have some of the league’s more ferocious bulls.

So much was written and said about their backline. That they conceded only 64.4 points per game – a league low – was not only a credit to their defensive pillars, but also a wider selfless philosophy they embraced in swarming opponents and filling space when they didn’t have the ball.

When the ball did pierce defensive 50, the Demons allowed opponents to score from only 34.9 per cent of their inside 50s – ranked No.1. This, in part, was because they allowed only 7.9 marks per game inside their defensive 50 – another league low. It reinforced why their defensive game plan, built around full-back Steven May, intercept master Lever, the rebounding Christian Salem, and the unheralded Harrison Petty, flourished when it counted the most.

On the break, they outscored opponents on turnovers by 16.1 points per game – a league high.

Through Gawn – with help from Luke Jackson, a star in the making – the Demons dominated the hit outs, averaging 16.3 more per game than opponents, another league high. Importantly, this extended into winning the hit outs to advantage by 5.3 per game – ranked second.

Never was that dominance more on show than in a stunning end to the third term on Saturday night, when six of the last eight goals of the term were from ball-ups, throw-ins or centre bounces, as Jackson and Gawn took charge. Seven of the Demons’ final 16 goals of the match came from centre bounces, the Dogs unable to stop the tidal wave.

The Demons’ potency in attack was on full display in the rollocking fourth quarter, as Bayley Fritsch – already the team’s leading goal kicker – became the first man since Darren Jarman in 1997 to boot six goals in a grand final.

The Demons boasted multiple weapons inside attacking 50 through the season, including Ben Brown, who came good at the right time. That they averaged 89.8 points per game, ranked No.3, through the season – and led on the scoreboard 61 per cent of the time – highlighted their balance at both ends of the ground.

This overall dominance has given rival clubs plenty to think about over the off season, with the Demons already eying a dynasty.

“I think they are really well balanced across the board,” Essendon coach Ben Rutten said of the Demons on Monday.

‘At a loss’: Brown baffled as Johnson delivers hammer blow to Warriors

‘Where is the ruthless anger?’ Lloyd hits out at Bombers