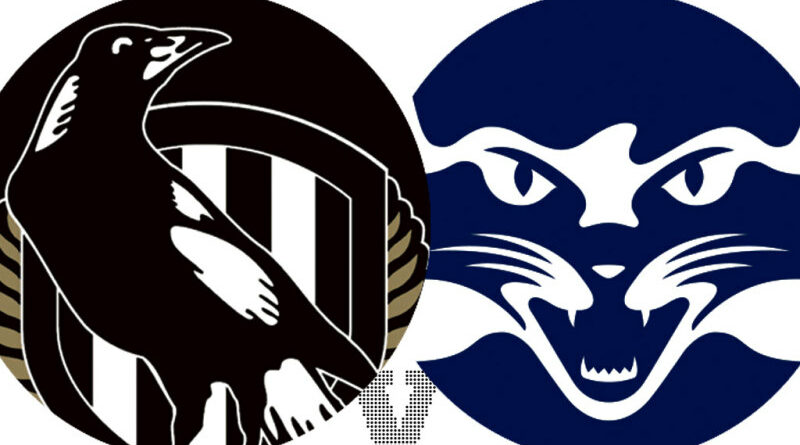 Lyons steps up to the plate 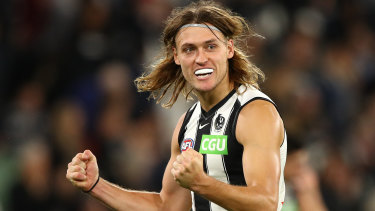 Selwood winds the clock back

The Brisbane Lions have raised fresh questions over the legitimacy of Greater Western Sydney’s AFL premiership claims with a 20-point win at Giants Stadium on Saturday.

In a see-sawing contest, both sides had their moments – but the Lions were better for longer, finally throwing off a nagging challenge from GWS in the final term to prevail 13.10 (88) to 10.8 (68).

After conceding the first four goals in a woeful start to the game, the Giants surged back in waves and closed to within seven points late in the third quarter. But, just like in last week’s defeat to Port Adelaide, they went missing when the chips were down. 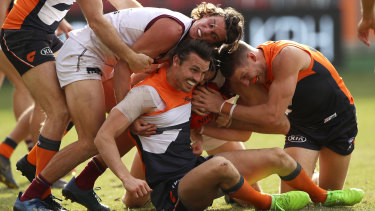 Last time they met: Cats mince Pies at their Gabbatoir

Just seven days before the Cats turned this venue into a Gabbatoir for Collingwood, they were viewed as tired, slow and old enough to be a super rules side.

Collingwood supposedly had the momentum of winning in Perth, the sudden confidence of upsetting West Coast and no fresh injuries. They’d beaten the Cats during the season, on the back of Jordan De Goey’s five goals.

What was easily ignored was that the Cats, actually, hadn’t played terribly against Port Adelaide, who were exceptional, and that they’d finished fourth in the 17-game season, compared to Collingwood’s eighth. 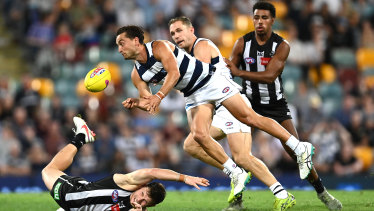 Luke Dahlhaus gets a handball away against the Pies.Credit:Getty Images

‘Price we had to pay’: Struggling Magpies ramp up focus on skills

Collingwood coach Nathan Buckley has revealed that the Magpies have added a skills-focused training session to their weekly agenda in a bid to rid the side of mistakes that have plagued a campaign gone wrong.

The Magpies head into Saturday’s clash against Geelong at the MCG in 16th position with only two wins, their season derailed not only by last year’s trade-period firesale but also too many basic skill errors through the opening 10 weeks of the season. 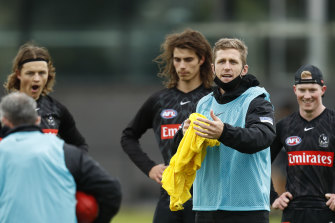 Collingwood are focusing on skills with extra sessions at training.Credit:Getty Images

Those errors continued in a one-point loss to Port Adelaide when, despite leading for more than 91 minutes and having a 75 per cent disposal efficiency, errors at key times meant they managed only eight goals.

Ball use has been a central theme for both sides in 2021. Collingwood has recorded a disposal efficiency differential of -3.2 per cent which ranks last in the league. Geelong has hit the target 4.7 per cent more often compared to its opponents – ranked No.1. Tom Stewart is averaging 15.4 effective kicks – ranked equal-third in the league.

Hello and welcome to the latest edition of our AFL Saturday live mega blog.

Kicking things off will be the Magpies and Cats at an empty MCG as the Brisbane Lions host GWS at the Gabba.

The twilight fixture pits St Kilda against North Melbourne at Marvel Stadium where, again, no fans will be in attendance.

And night-time double-header sees West Coast tackle Essendon at Optus Stadium and Gold Coast battle Hawthorn at the SCG, a game which was originally scheduled for Darwin.

Please feel free to leave a comment anytime and please enjoy the day to come.

‘Stabbed in the back’: Ex-Souths boss lifts lid on bitter Michael Maguire and Anthony Seibold feud