During 2019, the AFL's players have been uncertain about how the rules work, and the umpires, too, have seemed confused in how to apply these rules. But this uncertainty is the normal order of business for a messy game with a litany of grey areas.

Now, it is a portion of the game's fan base that has become confused about the rules governing their behaviour in the stands, about what will bring censure or ejection by security staff and/or police and what they can and can't say. 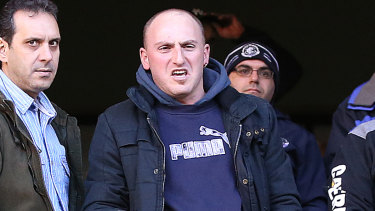 This Carlton fan was thrown out of Marvel Stadium on Saturday after an umpire pointed him out to security.Credit:Wayne Ludbey

The AFL claims there is no crackdown – not from their end, at least – but some of the rusted-ons in Melbourne, who tend to be more tolerant of excessive barracking, feel they are being more heavily watched and policed by Big Brother and the security company.

Whether it is a reaction to some violent incidents that attracted public attention this year and last, or if there's a connection to the more protective attitude towards umpires by the AFL, it is clear that these fans believe the environment has changed to one that is more zealous in policing the angry barracker.

It is natural to wonder, too, whether there is any link – possibly even an unconscious one – with the AFL's acknowledged failure to intervene against the booing of Adam Goodes, an issue re-heated by the release of two damning documentaries.

As fans have been ejected and censured for what may or may not be threatening behaviour towards umpires and/or their fellow supporters, the AFL has been slow to address the issue of what constitutes offensive barracking.

It would be helpful and timely if league CEO Gillon McLachlan spoke directly to the fans on this issue, if only to show that the AFL's spruiking of "the fan experience" isn't an empty slogan devised behind glass walls and that they've actually put some thought into what the fan experience should entail.

McLachlan should speak about the barracking question, not only for the fans, but as a guide for the security staff and police, who probably need some cues.

The AFL Fans' Association – a group that represents the mindset of the most committed, rusted-on cheer squad, go-every-week types – has sought AFL clarification on this very point of the dos and don'ts of barracking.

To say that there shouldn't be violence or racial/religious/gender/sexual orientation vilification of others is the easy part for the AFL.

The league's condition of entry tells the fan not to "act towards or speak to any player, umpire or other official or other patron in a manner, or engage in any conduct, which threatens, offends, insults, humiliates, intimidates, disparages or vilifies that other person on any basis including, but not limited to, that other person’s race, religion, colour, descent or national or ethnic origin, special ability/disability or sexual orientation, preference or identity".

The conditions specify, too, that you can be thrown out for being drunk or high on drugs. But the rules around language and "threatening" or "abusive" behaviour is the crowd's answer to prior opportunity – it is difficult for the police and security staff to umpire. 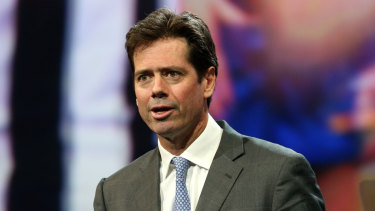 Swearing is problematic. Half of the Ponsford Stand at Collingwood games and the Punt Rd end at Tiger matches would be emptied if there's a prohibition on the F word or "bullshit" when they don't get the rub of an umpiring decision.

The C word is unpleasant, and beyond the pale for many, particularly if used repeatedly.

In a sense, the policing is best done by the fans in the vicinity, as they do via the anti-social hotline/text message. If there are younger kids present, a parent can point this out to someone who's lost the plot and crossed the line. Most fans, even those bordering on unhinged, tend to clean up their act when given this fan-to-fan feedback.

But the most blatant difficulty facing the AFL and the grounds (and security/police) is that, as we have learnt with the spate of incidents this season – including the one involving alleged threats to umpire Matthew Nicholls – many of them are "he said, he said" disputes, when the allegation is denied and there is no way of knowing the truth about what was said.

There is no habeas corpus in these cases. The ground security and police can simply kick you out. But it is also true that some highly obnoxious fans will use a plausible deniability and cast themselves as victims.

As with the rules, there will always be some bad calls by the umpires in the stands. But that doesn't mean we shouldn't know the rules, and McLachlan ought to let everyone know, for the fans' sake.