AFL clubs hope to be able to give their members a range of options to consider in the next fortnight as they scramble to make suitable arrangements for supporters in an interrupted season.

Club CEOs including Carlton's Cain Liddle and Richmond's Brendon Gale have been working together to create a uniform position across the 18 clubs with the clubs agreeing early in the piece that it would be not help anyone if wealthier clubs used their financial position to make offers to members that other clubs couldn't match.

The working group is understood to be considering offering members options such as credits on future memberships, converting memberships into tax deductible donations, as well as offering refunds where needed although nothing has been finalised as yet.

With the game suspended until at least May 31 (although few expect it to return that early) and a new fixture to be developed if the season does get underway, significant uncertainty remains as to what lies ahead with AFL CEO Gill McLachlan saying he is prepared for the season to extend until the end of the year to ensure the remaining 144 games plus finals are played.

Geelong CEO Brian Cook told a KRock podcast that the Cats had been overwhelmed with support from members as the industry dealt with the myriad of decisions required after the game was cancelled due to government restrictions in place to control the spread of the coronavirus.

"We’ve been working towards a common strategy for all clubs, and it will involve, eventually, several options for their members to consider," Cook said. 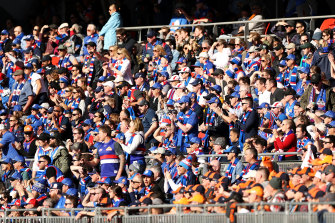 AFL clubs hope to have an update on memberships within a fortnight. Credit:Getty Images

Cook expected club members would have about five options to consider once clubs and the AFL had approved the approach with the veteran CEO also anticipating it would need the Australian Competition and Consumer Commission's tick of approval.

Membership has been one of the game's biggest growth areas with club bosses describing members as the "lifeblood" of clubs before the coronavirus crisis.

Club officials have been heartened by the response of members with more people happy to leave their money with the club at this stage than wanting refunds. All clubs have had people buy memberships since the season cancelled too.

However they are also conscious there are many people, like clubs, who have suddenly been hit with significant financial troubles as jobs disappear so they are attempting to work out a suitable solution.

It's unclear at this stage what approach will be taken with AFL members.