Home » Rugby League » AFL v Delta: why the show will go on, without virus delays 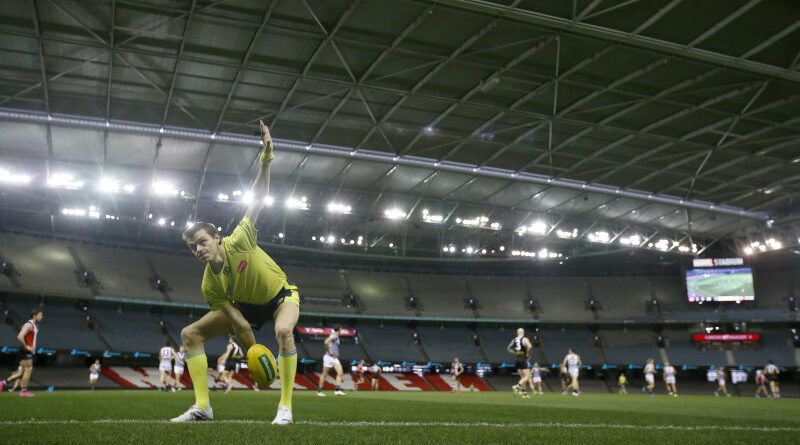 As borders close and the virus closes in, the AFL is increasingly a seat-of-the-pants operation with clubs thrown around the continent, in a thus-far successful attempt to stay one step away from the dreaded Delta variant.

This has elements of a bad dystoptian disaster movie, with teams on the run like John Cusack in the film 2012. 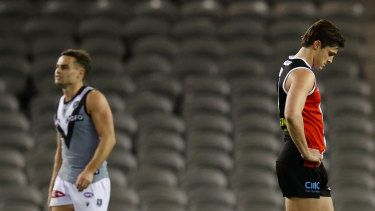 Jack Steele after St Kilda’s loss to the Power at a crowdless Marvel Stadium.Credit:Getty Images

Given the situation, it’s natural to ask whether the AFL, its players and teams can keep the show on the road; if rather than coping with mere lockdowns, they will soon be dealing with a shutdown – a period without games, even of a short duration.

This is the fate that the AFL will do almost anything to avoid. Their intention is to keep playing games, counting down the number left as if they’re sitting in a cell, crossing off the days until they’re free.

Forget the idea of a hiatus, or the Delta-inflicted version of a rain delay that forces them from the field for a week or two. Forget the concept of bringing forward the pre-finals bye.

No, if the AFL has its way – and Delta doesn’t finally pin them in a tackle nastier than Shane Mumford’s – the show will go on, without delay.

They’ll play on, according to senior AFL sources, because the risks of stopping are greater, no matter the inconvenience. Rightly or not, the reasoning is that the situation could always worsen, so you plough on.

It doesn’t matter if the fixture is unfair. That’s inevitable. The Swans and Giants have been given the rough end of the pineapple, forced into exile and shunted to Melbourne and then Queensland (though this has hardly hurt the impressive Swans), as Gladys Berejiklian imposes her Clayton’s version of a lockdown (one you have when you’re not having one).

It doesn’t matter if there are no crowds. The AFL and the clubs spent much of their time and energy on getting crowds back this year and, as of Monday, they were selling tickets to Collingwood v Carlton and North v Essendon on the basis that they could have a maximum of 40,000.

On Sunday, the Blues will have to pay tribute to club legend Sergio Silvagni, who died on Thursday, in the silence of an empty MCG.

It doesn’t matter if there’s financial pain for the teams that have lost home games or gates.
Melbourne sits atop the ladder, with a serious shot at breaking football’s longest premiership drought. Normally, this would mean a financial windfall for the Demons.

Alas, Delta had other ideas. The Demons have lost close to $1.8 million, according to club sources, from the loss of their Alice Springs game and the relocation of the Queen’s Birthday game from the MCG to the SCG.

The clubs, who can whinge about anything from a dud umpiring decision to playing on Mother’s Day, have been utterly stoic. The players have had their bags packed, ready to move like SWAT teams.

Delta is a game-changer for the clubs, players and competition. It has made (state) governments more reactive, with the sudden imposition of border closures, red and orange zones and tougher rules for the AFL teams that cross those borders in what’s called “a sterile corridor”.

When the state governments change rules at the drop of a hat, the AFL must improvise, baulking around Delta and thinking a step or two ahead of the play, like Scott Pendlebury; this is why Essendon are marooned in Queensland – the Dons had to play GWS and the Swans in rounds 19 and 20.

For many of us, the major questions of another COVID-compromised season are these: will there be full or even three-quarter-full crowds in Melbourne? And, if not, will the grand final be elsewhere again?

No one at the AFL has a clue what will happen with crowds, but it is hard to see the grand final leaving the MCG if they can manage even half capacity this season.

Next year presents a different scenario, and a different kind of futuristic dystopian movie – something closer to Gattaca, the Ethan Hawke vehicle in which people have a biological barcode, with only the A class permitted to enter certain fields. Logically, the AFL should be following the Euro final at Wembley example in which, to attend games, fans must either be fully vaccinated or have a negative COVID test result within a day or so of the game.

Our lack of progress in getting vaxxed means this isn’t an option for 2021 finals, when – as of today – you’d have the players running around on grand final day without vaccination.

North, if they haven’t already, should point out what’s coming to Jaidyn Stephenson, who reckoned all this fuss about the virus was overblown.

Only a winning start can save McGregor and the Dragons