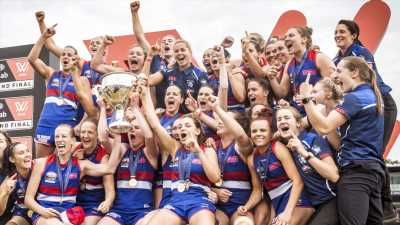 The AFLW grand final will be held in clear air on the footy fixture, and will not clash with an AFL men’s game.

The AFL announced on Wednesday that the men's Western Bulldogs v Gold Coast Suns match will be moved from 1.45pm to 4.35pm on Saturday week. 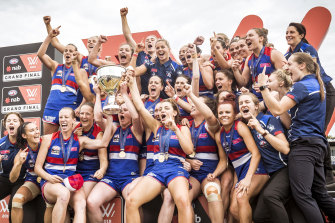 Western Bulldogs, AFLW premiers for 2018. This year’s grand final will not clash with a men’s AFL game.Credit:Chris Hopkins

That means the AFLW grand final will be played at 2pm in the home state of the highest-ranked preliminary final winner.

It will be played at the MCG, Adelaide Oval or the Gabba.

Minor premiers Adelaide will host Melbourne, with Demons star Daisy Pearce in a race to be fit because of a knee injury, in a preliminary final at 2.10pm (AEST) on Saturday at Adelaide Oval.

The Brisbane Lions will play Collingwood in the other final, at the Gabba at 4.10pm on Saturday, to determine the second team to progress to the AFLW grand final.