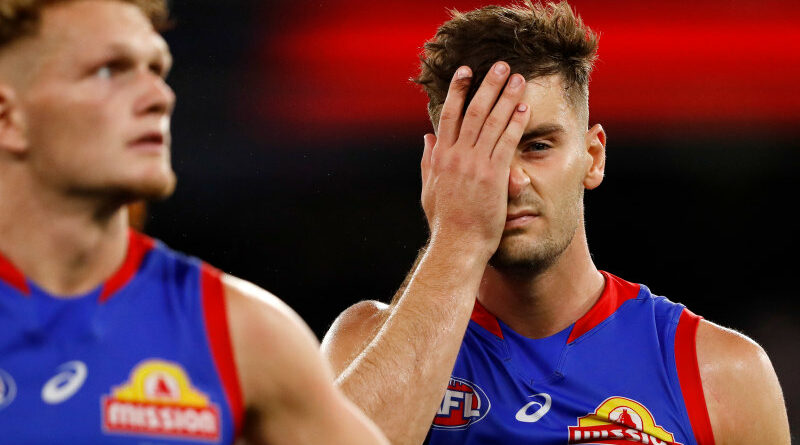 The Western Bulldogs have a goal to nail their problem. Or put differently, they have a goal problem they can’t nail.

The Bulldogs sit only ahead of the still winless Port Adelaide for goal accuracy. They have converted just 40 per cent of their shots at goal this year. For comparison, the Swans, the top-ranked team after four rounds, have scored from 60 per cent of shots.

One of the issues for the Dogs is that two of their gun midfielders have yet to make a mark on the scoreboard. Bailey Smith has had seven shots at goal for no goals. Josh Dunkley has had six shots, also for no return. 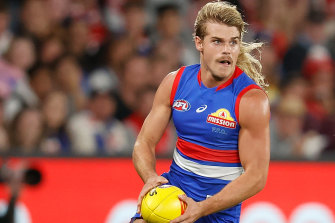 Bailey Smith has had accuracy issues in front of goal.Credit:AFL Photos

The loss to Richmond was a low point. They booted 7.15 from 29 shots (including those that went out of bounds) for an accuracy rate of just 24.1 per cent.

“Frustrating is probably the obvious word. The last few weeks we’ve kicked way too many points,” coach Luke Beveridge said after the game.

The counter-point to the Dogs was West Coast on Saturday. They booted 14.3 to beat Collingwood who had seven more scoring shots than them. Again. That is efficient football.

Historically, Josh Kennedy and Jack Darling are two of the most accurate shots at goal in the AFL. On Saturday Kennedy only had five kicks, but he kicked three goals. Between Kennedy (three) Willie Rioli (three) and two each for Liam Ryan and Jack Darling, the Eagles’ forwards kicked 10 goals between them and none of them missed a shot.

In it he makes several critical points about individual and team goal-kicking accuracy. The first is obvious – that teams are more accurate kicking from the corridor. Set shots, despite being comparatively more difficult, mentally, are more accurate than shots in open play.

The second point is that, contrary to assumptions in recent years, players are significantly more accurate using a snap set shot, kicking the ball across the body at 90 degrees even when right in front of goal, than they are using a drop punt.

Wheadon says the standard line of inquiry when a team kicks poorly is to query how much time players are working on goal-kicking at training.

“For some players you might just be putting repetition into inaccuracy – go out and practice my slice,” Wheadon said.

So, the aim must be to make sure the technique is effective. Kick the ball higher and with more rotations to get a more accurate kick.

Some players routinely kick unerringly in practice. But there are not 50,000 people in the stands at practice sweating on the kick.

The player at training is also not shouldering the cumulative pressure of his teammates’ missed shots with the opposition seemingly kicking them at will, as happened in the Collingwood-West Coast game.

So goal-kicking is about routine that works, visualisation, relaxation and momentum.

“The most common mistake in set-shot goal kicking technically is to run off-line. Some players will run off-line from 30 metres out so, it’s not about trying to get distance. Watch the great ones, Kennedy, Darling, Ben Brown, Luke Breust: they all run straight.

“Four things can happen: you hit the outside of the ball and hook it, you swing your leg across the inside of your body and you slice it, you kick it where you want and it goes dead straight, or you hit it well and it goes the way you are running – and you miss.”

Then it’s about momentum transfer. Why do lawn bowlers crouch down and walk straight after a bowl? It’s body weight transfer and momentum, said Wheadon.

“Jimmy Bartel was fantastic. Peter McKenna used to keep running at the man on the mark after he kicked it,“he said. “They are body kickers rather than leg kickers, who slow up and rotate the leg quickly to get power.

“Tommy Hawkins jumps, and it’s very hard to jump sideways when you are kicking, so he jumps in a straight line.”

Momentum is true not just of the kick but the impact it has on the team. Nothing lifts momentum more than kicking the goal. Noting deflates it more than missing and the opposition scoring.

Tigers bounce back from Easter Monday mauling with 61-point turnaround