The only ruckman to win a North Smith Medal has advised Stefan Martin to not forget his own offensive game when he seeks to tame Melbourne star Max Gawn in the AFL grand final.

Simon Madden, the Essendon champion who torched Hawthorn in the 1985 grand final, said Martin, the robust Western Bulldog, had a key role to play against a man who will be one of the favourites to claim the esteemed individual prize come Saturday week at Optus Stadium. 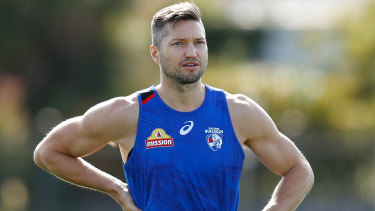 Martin, returning from a groin injury and in only his eighth game of the season, was pivotal in Saturday night’s victory over Port Adelaide but now faces an enormous challenge against Gawn, who had the game of his life against Geelong last Friday with 33 hit outs, 19 disposals and five goals. 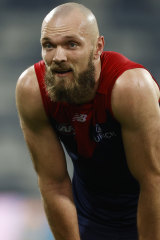 Max Gawn is in imposing form for the Demons at the most important stage of the season.Credit:Getty Images

“But, also, if I was his ruck coach or his coach, I would be saying, depending on the team rules, anytime you get to run off him and get the ball, you put pressure the other way. If he doesn’t have to worry about you, he can run his own game. If he has to worry about you, his mind is split in two places.

“So, if you run around, get your opportunity to get a possession. It’s always that balance of defence and offence but, sometimes, you can worry about the bloke and not be offensive.”

Gawn’s ability to go forward and create trouble has been on show all season, including when the skipper marked and booted the match-winning goal after the final siren against the Cats in round 23. He has 16 goals this season; Martin, his good friend and former Melbourne teammate, has only one in his first, and perhaps only, season at the Whitten Oval before retirement.

Regardless, Martin’s importance to the Dogs cannot be underestimated, given they have won seven of the eight matches he has played, the only loss being to Richmond in round seven.

While they did have an 11-6 win-loss record without him, a peak below the hood shows why they are structurally better with the 34-year-old making his presence felt.

When Martin has played, they have averaged 97.1 points per game, up from 88.1 without him. He also allows Tim English to spend more time forward as a marking tall, an important role since Josh Bruce was lost to a knee injury. The emergence of Josh Schache in recent weeks alongside Aaron Naughton should ensure Demons defenders Steven May, Harrison Petty and Jake Lever will be held accountable.

While the Bulldogs are still negative in terms of hitout differential, it is not as imbalanced when Martin is there. Critically, the Dogs’ scores from stoppages differential lifts from +5.8 to +14.9, as the midfield fleet gets busy. No wonder coach Luke Beveridge said on Friday his midfielders had regularly been asking when Martin would return.

Through the season the Dogs are also marginally better in centre-clearance differential when Martin is in the team, but Saturday’s seven-goal-to-one first term underlined his true value.

“The first goal they kicked tonight was Stef Martin winning the first centre bounce, getting it down to Bont (Marcus Bontempelli), getting it long, Bailey Smith kicks the goal,” Bulldogs’ great Brad Johnson told Fox Footy.

“That’s the importance of a Stef Martin now going into grand final day against Max Gawn, because all of a sudden their confidence is back in centre bounces, where that was the one part of their game that was being questioned.”

Martin rolled his ankle on Saturday but had the joint re-strapped and returned to the field. It’s been a frustrating year of injury for the grizzled 14-year veteran, who had spent his previous eight seasons with Brisbane. But, as Beveridge said, one thing is assured come selection on Thursday week.

“If he is alright in two weeks, absolutely, he will be playing in the grand final if he is physically OK, no doubt,” Beveridge said.

Interactive rugby player ratings: Rate every All Blacks player against Argentina in their Tri Nations test in Sydney

Long wait ends for Blues as they easily down Bulldogs