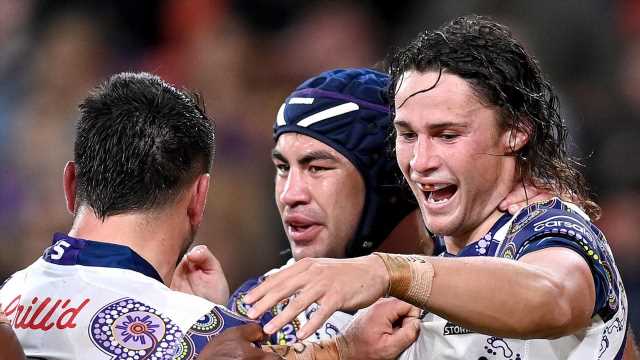 Coach Craig Bellamy says the Storm’s contractual position on breakout star Nicho Hynes has not changed despite the 24-year-old’s value rising by the day.

The Broncos have tabled an offer for the off-contract Melbourne utility and Brisbane bean counters may have to bump up the dollars after Hynes turned in a masterclass in Thursday night’s 40-12 win.

Hynes put in the perfect audition for a Broncos contract as Melbourne retained their 12-year unbeaten record against Brisbane at Suncorp Stadium.

Hynes has said he wants to be a starter and he showed the value he offers at fullback with two try assists, three line breaks, a try and a personal haul of 16 points.

But with Ryan Papenhuyzen having a mortgage on the number one jersey at Melbourne, Hynes will have to look elsewhere to become a permanent fixture of a starting NRL side.

“We really want to keep him without a doubt,” Bellamy said after Thursday night’s win.

“We think he is a very talented player and he is a popular guy around the group. It all depends on what Nicho wants out of his footy career at this time and next year.

“We have a position in our cap where we can offer him a certain amount. Whether that is going to be enough, I’m not quite sure.

“It is hard for us to guarantee him a spot in the starting side.”

Melbourne’s spine is bursting with talent even in the absence of injured stars. (Photo by Albert Perez/Getty Images)Source:Getty Images

Melbourne stretched their dominance over Brisbane to 10 consecutive wins and remain unbeaten against the Broncos at Suncorp Stadium since 2009.

Craig Bellamy’s team continues to rewrite records and, incredibly, the victory was their 22nd in succession in Queensland at all venues — not bad for a team hailing from Victoria.

Suncorp Stadium continues to be a happy hunting ground for Melbourne, who now have 23 of 27 wins at the venue in their illustrious history.

Bellamy said the effort of his side, after finding out they would be staying at Twin Waters resort on the Sunshine Coast due to the unfolding COVID-19 situation in Melbourne, was heartening.

“Most guys were going home tomorrow because they have got families at home, but they aren’t going home,” Bellamy said.

“They had to get a few things organised yesterday so we could keep our minds on the job today, and I knew that would be tough because I found myself drifting off a bit thinking about that as well. I am real proud that they turned up and put plenty of effort in.

“We love playing here but with what is going on at the moment there was room for them to make an excuse and not have their mind on the job but I thought they did a great job.”

The good news? At least Rupert doesn’t run the show any more 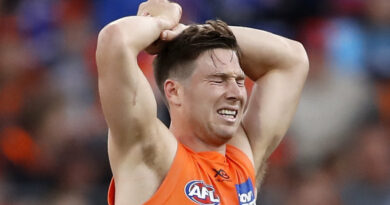 It’s a gamble, but the Western Bulldogs should target Toby Greene