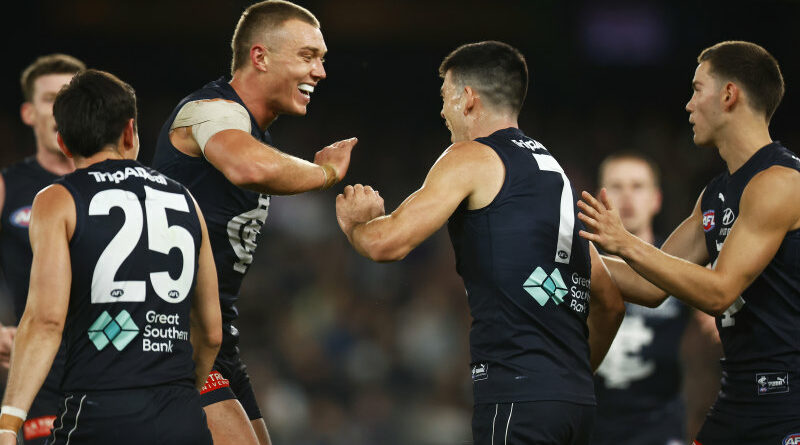 Carlton are back into the top four after blowing Adelaide apart in a third-quarter rout that saw the Blues turn a 14-point lead just before half-time into an 11-goal buffer at the final change.

Tall forwards Charlie Curnow and Harry McKay proved a handful for the Crows’ defence, but it was captain Patrick Cripps who starred for the Blues at the coalface. 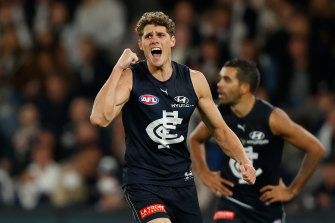 The Brownlow Medal favourite booted two goals in the opening half, and had 17 contested possessions, nine clearances and six tackles to his name by three-quarter-time, by which point the game was done.

The Blues slammed on 6.6 to the Crows’ two behinds in the third term, including a pair of goals each to Zac Fisher and Jack Silvagni, which opened up a 66-point lead.

But it was Curnow and McKay who inflicted the most damage.

They had three majors apiece in the first half, and finished with nine between them. 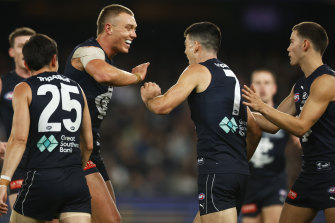 The Blues were too good for the Crows on Sunday.Credit:Getty Images

Taylor Walker was warrior-like for his side, with two first-half goals, but it was all Carlton in the second half. They had 20 inside-50s to eight in the third term, and won the clearances by 10, including all six centre clearances.

The win saw Carlton finish round eight in fourth spot on the ladder, one game behind Fremantle and Brisbane, and a game ahead of Geelong, Sydney and St Kilda.

Before round three this year, when they were undefeated, the last time the Blues finished a round in the top four was after round seven, 2012, when they were 5-2. Their season petered out from there, and they finished 10th with 11 wins. 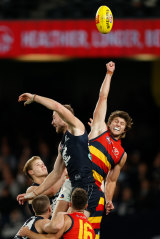 The Crows had six of the first seven inside-50s within the first four minutes of play to get two quick goals on the board early. But the Blues found their mojo, kicking the remaining three goals of the first term and then the first two of the second quarter to string together five in a row.

Shane McAdam broke the drought in the ninth minute of the second term, with Adelaide’s fifth inside-50 of the previous 29 entries. Jordan Dawson and Walker kicked consecutive goals later in the second quarter to cut the margin back to 14, but they were completely over-run from that point on.

Goals to Curnow and McKay in the final three minutes gave the Blues the rewards on the scoreboard that they deserved, and the 26-point margin better reflected the difference between the two sides up to that point. The Crows finished with five of the last seven goals of the match, when the game was well and truly done.

When both McKay and Curnow fire up forward, it goes without saying the Blues are difficult to beat. In round two, when they beat the Bulldogs, the pair had nine goals between them. They had eight between them in round five in their win over Port Adelaide, and against North Melbourne last week they combined for seven goals.

In their two losses this season, they were restricted to just three by the Gold Coast Suns and four by Fremantle.

The Coleman Medal table makes for interesting reading after eight rounds. Richmond’s Tom Lynch sits at the top with 27, while Curnow moved into second on 25. Geelong’s Jeremy Cameron and Essendon’s Peter Wright are close behind on 24, with Tom Hawkins (23), Max King (21) and McKay (20) the only other players with more than 20 goals this season.

More than 25,000 people turned up to watch the Blues and Crows on Mother’s Day. For context, it was slightly more than the crowd of 24,906 that attended the Essendon vs Adelaide game in round four, also on a Sunday. At the MCG, a crowd of 35,767 attended the Melbourne vs St Kilda contest.

The AFL scheduled just two games on Sunday due to Mother’s Day. 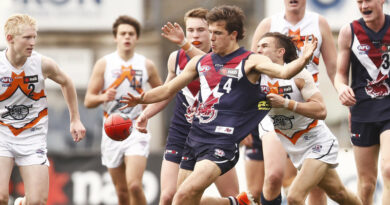