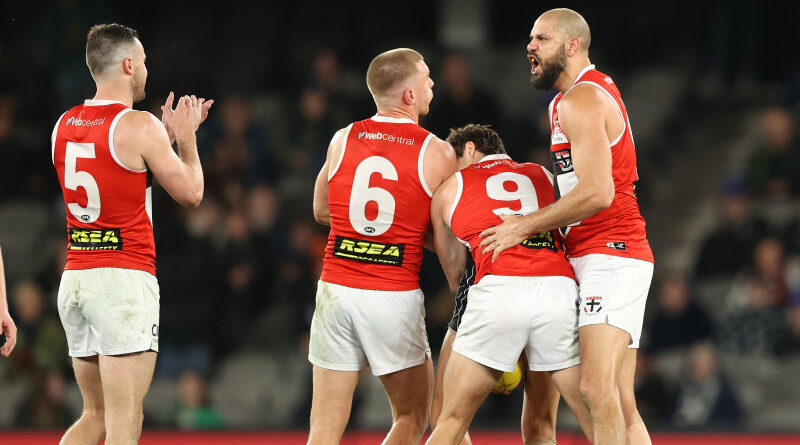 St Kilda are back in the finals hunt after upsetting Carlton with a pressure-packed game where the lead changed eight times as the Saints refused to wilt.

The performance was a statement of faith in soon-to-be-reappointed coach Brett Ratten and a reminder to everyone, including Blues fans, that nothing is guaranteed in 2022, least of all a finals spot. 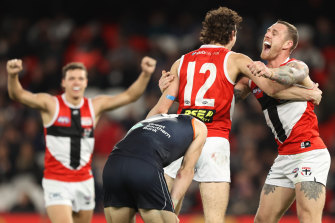 Although a response from the Saints was not unexpected after three horrible losses led to them slipping from fourth spot on the ladder to 10th, they showed courage and resilience to deliver the 15-point win.

The victory came despite a calamitous last quarter when Hunter Clark was stretchered from the ground with seven minutes remaining after clashing heads with Dan Butler while trying to tackle a Blues’ opponent.

The Saints had already lost Dougal Howard to a leg injury and Rowan Marshall was off the ground getting a concussion test.

It made for a tense final seven minutes as they had a nine-point lead to defend with the bench as empty as the dugout of the Seattle Mariners baseball team earlier in the week.

But the Saints came on a mission to win the four points and nothing was going to stop them, with two last-quarter goals to Tim Membrey sealing the win. 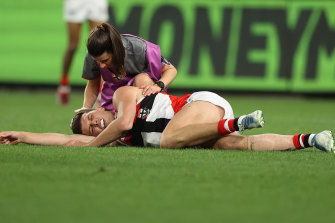 They showed they were on with an opening blitz that could have put the game out of the Blues’ reach if they had kicked straight.

They attacked both the ball and the body to keep the football in their own half but only managed three goals as Marshall, Butler, Jack Higgins and Paddy Ryder missed set shots they should have kicked.

The Saints were not only creating scores through forward-half turnovers, running defenders Jack Sinclair and Brad Hill were finding space and worrying the life ouf of Carlton’s depleted back line with their penetrating forward entries.

Carlton had to adjust and, to their credit, they did with Matt Cottrell influential after he was sent to quell Hill, who had gained 218 metres in the first quarter. The Blues kicked five unanswered goals as they found their rhythm and a handy lead of 11 points midway through the second quarter. Josh Honey had created two of the first three goals and Charlie Curnow was worrying Callum Wilkie. 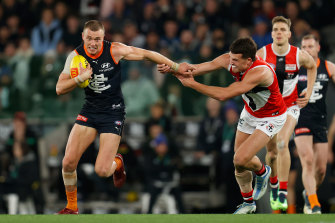 Patrick Cripps on the run for the Blues.Credit:AFL Photos

At that point, it appeared as though the Saints had done their best, but their best was not going to be good enough. However, a fumble from Lochie O’Brien allowed the Saints to hit back with a goal to Higgins, followed immediately by a centre-clearance goal to Butler (via a tackle on George Hewett from Brad Crouch).

Ryder intercepted a lazy kick from Adam Cerra and the wind was no longer at Carlton’s back.

It took a piece of brilliance from Jesse Motlop to interrupt St Kilda’s run, with the small forward, fighting hard on the ground after dropping a mark inside 50, winning the ball before being legged without winning a free kick. He stood up and kicked his second banana goal for the game.

At that point it was anyone’s game but in the third quarter Carlton got the wobbles in front of goal, kicking 1.6 with Curnow, Hewett and Tom De Koning missing relatively easy set shots when the Blues had the ascendancy.

The issue was compounded when the Saints went forward after they created another turnover in the forward half – having applied pressure in the forward half all game – to create a red-time goal for Higgins against the run of play. When Jack Steele kicked a second from a centre clearance immediately the Saints had a two-goal lead at the final break.

It proved to be enough as the Blues’ depleted defence was overcome in the end with the Saints making them pay after quarter-time when they kicked 11.3 for the final three quarters. 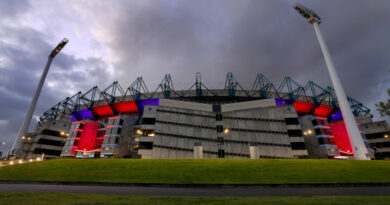