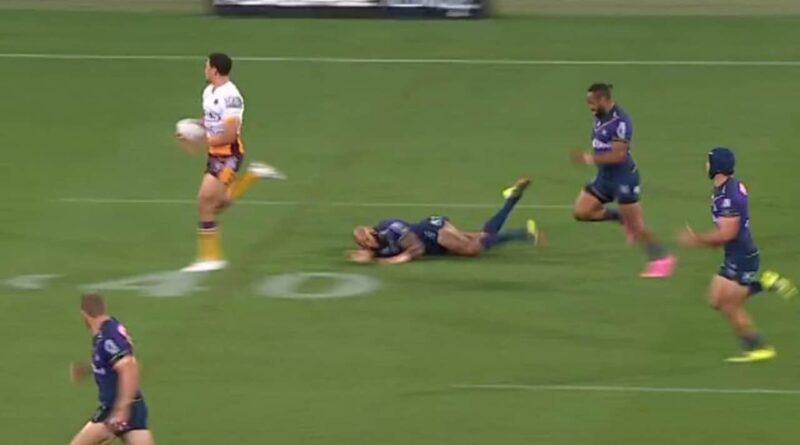 Rewind to last year and you’ll remember Phil Gould was mercilessly mocked for repeatedly referring to Josh Addo-Carr as the “fastest man on the planet”.

He was complaining about NSW being robbed of a try in its 20-14 loss to Queensland in game three of the State of Origin series, and social media had a field day.

Widely considered the quickest player in the NRL, Addo-Carr couldn’t catch up with Brisbane young gun Xavier Coates as the 20-year-old scooted away to score a length-of-the-field try in the first half of the Broncos’ match against Melbourne on Friday night.

Quick hands saw Coates pick up possession 20m out from his own line after a Storm dropped ball, and away he went. Pre-match he told Fox League Addo-Carr was faster than him but he surprised even himself with a clean pair of heels that left the Melbourne winger eating his dust.

All aboard the Xavier Coates Express.Source:Getty Images

Not trusting his ability to catch up with Coates before it was too late, Addo-Carr went for a desperate dive but missed his attempted ankle tap and after a messy opening to the match, the Broncos got on the board first.

Commentator Cooper Cronk called it “the first time that someone has ever run faster than Addo-Carr”.

“I thought Addo-Carr had him covered. He dives early, he gave up early thinking that Coates had run away,” Cronk told Fox League.

“I thought for all money Addo-Carr was going to run Xavier Coates down but he dived early, knowing he was going to be under pressure in the long run.”

Things only got worse for the Broncos from there though, conceding 24 unanswered points as they went into the sheds down 24-6 at halftime.

Blue v Steele: The Saint set to get first crack at Cripps this weekend