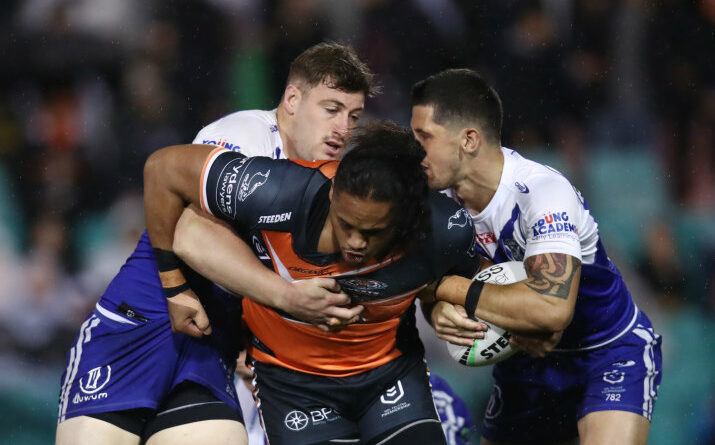 After three operations on a foot injury that should have ended his career and three years in the NRL wilderness, Wests Tigers utility Nu Brown bagged a heartwarming double to sink a Bulldogs fightback at Leichhardt Oval on Friday night.

Trailing 18-0 after Jackson Hastings marshalled endless left-edge raids to the tune of four first-half tries, Canterbury looked every bit a last-placed side with the wooden spoon already residing in their cutlery drawer. 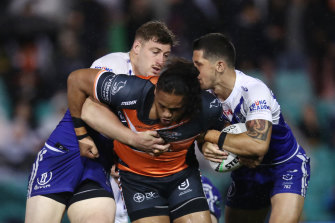 Tigers forward Luciano Leilua is tackled by the Canterbury defence at Leichhardt Oval.Credit:Getty

After their interim mentor, former Tigers coach Mick Potter, got a hold of them at half-time, they looked so much more, setting up a thrilling finish and a two-point game with 19 minutes to play.

But when young centre Aaron Schoupp dumped Starford To’a on his head with a lifting tackle and wound up in the sin bin for his efforts, the Tigers struck.

It was Brown burrowing over from dummy-half in the 62nd minute who swung the contest in his first game since 2019, coincidentally in blue and white.

The well-travelled utility had been to hell and back in the meantime with surgeons telling him he would never play again at age 25, but Brown’s game-turning four-pointer had 15,124 Tigers fans in raptures as one of the year’s feel-good moments.

The Tigers finally put Canterbury to bed soon after through Jock Madden’s solo chip and chase try, but only after Potter’s side threatened the mother of all boilovers.

Having been shown the door by Wests Tigers eight years ago, extinguishing an NRL coaching career few thought would ever be revived, for 40 minutes Potter must’ve been wishing it had stayed that way.

Hastings had the ball on a string and kept sending it left, finding fortune and no less than four tries by repeatedly targeting Canterbury’s right-edge of Kyle Flanagan, Joe Stimson, Jake Averillo and Jayden Okunbor.

Only Madden’s wayward boot and a couple of desperate trysavers kept the Tigers’ half-time lead to 18, Ken Maumalo scoring twice in the process. 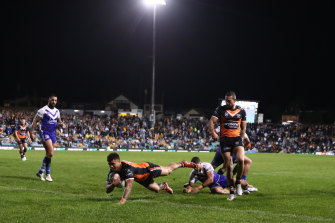 Starford To’a touches down for the Tigers.Credit:Getty

But when star Bulldogs signing Tevita Pangai jnr, already the subject of concern around seeing out the remaining two years on his lucrative deal, showed exactly what he’s capable of, the visitors’ revival was on.

He stepped through sleepy Tigers defence with Matt Burton on hand for the big man’s offload and Canterbury’s first points.

A long break by Matt Dufty on the next set saw him cut down just short of the tryline and Hastings sin-binned on the next play for a professional foul.

Against 12 men Jeremy Marshall-King made it a six-point ballgame by the 45th minute.

As Hastings re-entered the fray Jacob Kiraz was diving over in a muddy left-hand corner for Canterbury’s third try in 12 minutes, Burton piloting a long ball on the last tackle to strip the defence and reduce the deficit to two.

But with the Bulldogs now short a man, Brown gave the Tigers breathing room to go on with it, before nabbing one for the road in the 78th minute for the happiest of NRL homecomings.

Injured star forced out of Knights squad due to coronavirus restrictions

Generous? Yes. But the AFL had no choice with Suns 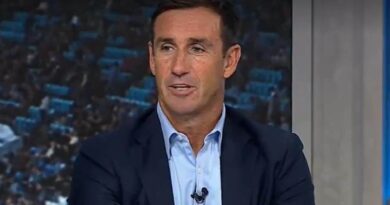