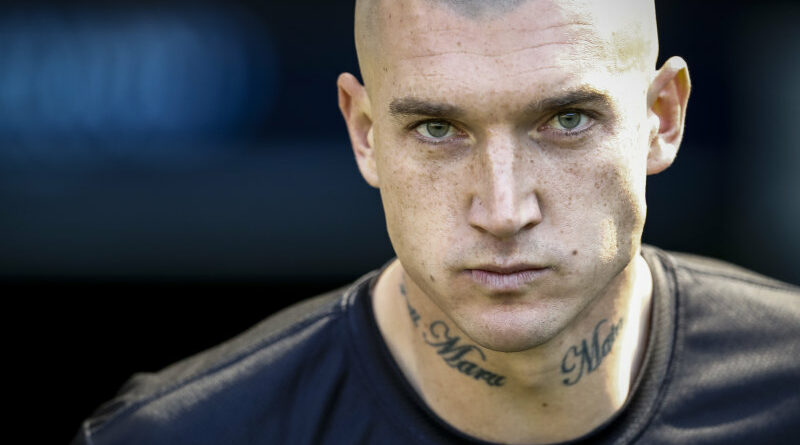 Richmond superstar Dustin Martin has received clearance to travel to New Zealand to visit his father but has been warned he will not be given any special treatment should border issues arise.

The AFL confirmed on Tuesday night that the Tigers had asked for help in determining whether Martin should be given approval to make the trip. 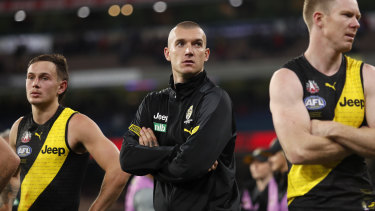 Dustin Martin suffered a concussion during the Tigers’ loss to Melbourne on Saturday and will miss this weekend’s game.Credit:Getty Images

There is a travel bubble between New Zealand and Australia but the danger is that could quickly close should there be a coronavirus outbreak.

Martin was considering leaving as early as Tuesday night given he is unavailable to face the Western Bulldogs on Friday night after he was concussed in the Tigers’ loss to Melbourne on Saturday and cannot play or train fully for 12 days. His trip is expected to only be short one, with the Tigers facing Geelong, again on a Friday night, in round eight. He will need to pass concussion protocols and train in the lead up.

The Tigers have been told Martin’s trip is their responsibility, so if there are any issues, it is up to the player and club to work through them.

Tigers coach Damien Hardwick will elaborate on Martin’s plans when he fronts his weekly press conference on Wednesday.

Martin’s father Shane has missed all three of the Tigers’ premierships that have featured his son as he was deported to New Zealand in 2016 and has had his attempts to re-enter Australia rejected.

“It’s been a massive challenge, but it is what it is,” Martin said on Fox Footy during an interview with AFL great Nick Riewoldt earlier this year.

“I love my dad and he’s made me the man I am today. I’ve got full belief he’ll back here to watch us win another flag.“

Meanwhile, Carlton forward Charlie Curnow is on target to rejoin full training, with the Blues declaring the injured star is still expected to return to the field later in the season.

Curnow, 24, has not played a senior match since June 2019 because of knee issues, having had his latest surgery in November last year. 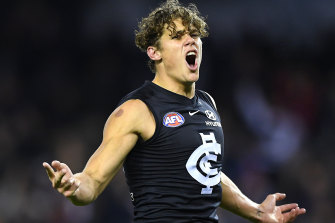 Charlie Curnow celebrates a goal in June 2019, against the Western Bulldogs, just before he was injured.Credit:Getty Images

“He’s on track and he’s exactly where we expected him to be. He’s running, he’s doing agility work, he’s kicking the footy. He’s not quite back into training with the group yet, but he’s progressing well,” Russell said on Tuesday.

“We’ll be guided by Charlie’s body, how he recovers from training sessions and how it adapts from week-to-week as to how quickly we can progress him. But if all goes well, we’ll have him available later in the season.”

Curnow is seen as the missing link in the Blues’ quest to become a legitimate finals contender for he is capable of being a match winner. He booted seven goals in his last full match, against the Western Bulldogs. However, his career has been cruelled by a fractured right kneecap, a hairline stress issue in the same knee, and then a patella problem last November.

He has played only 58 matches since being selected with pick 12 in the 2015 national draft but fellow tall Harry McKay, off contract, has matured in his absence and is second in the Coleman Medal race.

Ahead of Sunday’s crunch clash against Essendon at the MCG, the Blues will have ruckman Tom De Koning, Nic Newman, Jack Carroll and Luke Parks available for selection, whether that be in the AFL or VFL. De Koning and Newman are set to play their first matches of the season.

Russell said a decision on whether Jack Silvagni was cleared to return from shoulder surgery would be made later in the week.

‘Homesick’ McKenna back for the Bombers