Collingwood have been handed a $50,000 fine – half of it suspended – after head coach Nathan Buckley and assistant coach Brenton Sanderson played tennis with Australia's Fed Cup captain Alicia Molik and one other unauthorised person from outside of the Magpies' Perth hub. 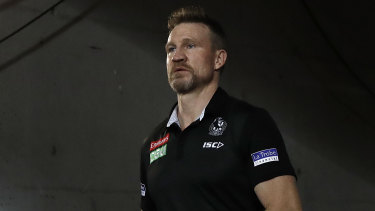 Buckley and Sanderson immediately reported the breach "when they realised they didn't have the appropriate approval to partake in the activity", an AFL statement read.

The Pies and Buckley and Sanderson accepted the penalty for the activity, which occurred on Friday afternoon.

The pair received permission to play tennis outside their hub on Wednesday and Friday but the breach occurred when Molik and one other person joined them for the second session on Friday. They are barred from playing with anyone not living in Collingwood's hub.

Buckley and Sanderson – who have long been close friends – will pay the $25,000 from their own pockets. Their conduct did not breach any WA government protocols and came after they completed their 14-day quarantine in the state. 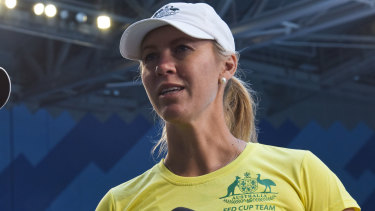 "We note that tennis is an approved exercise activity however approved participants are limited to approved club staff, players, household members and immediate family. Notwithstanding the inadvertent nature of this breach, it doesn’t excuse the responsibility to abide by the protocols," Dillon said.

News of the breach comes the day after Collingwood president Eddie McGuire called for those who broke the rules in AFL hubs to get sent home.

“And in fact, if anybody transgresses you’re on the plane home, we’re not gonna cop this stuff. And I think that’s just where it’s gotta be.

“It’s gotta be so clear cut that no one can have any mitigation, that ‘oh I thought this happened, I heard that that happened or I didn’t know you couldn’t do that’. You can’t do that.

“Ordinary circumstances you haven’t got the entire AFL in a bunker and a season on a precipice.

He also called for the AFL to consider fining the individuals who broke the rules before fining clubs.

The fines were for a group of Hawks players going into the SCG’s public area to buy food during a game, a partner of a Richmond player going to a beauty salon, a Carlton player's children going with relatives to a theme park and North Melbourne allowing partners and family to attend a game.

On Sunday Collingwood vice-captain Steele Sidebottom will return from a four-match suspension he received for breaching the AFL's return to play protocols.

A riddle wrapped in an enigma: Who exactly is Khoder Nasser?

It’s time to get funky. Phase 2 of the 2020 NHL draft lottery is upon us and NOT the worst team,

Jaguars edge rusher Yannick Ngakoue parts ways with agent
We and our partners use cookies on this site to improve our service, perform analytics, personalize advertising, measure advertising performance, and remember website preferences.Ok