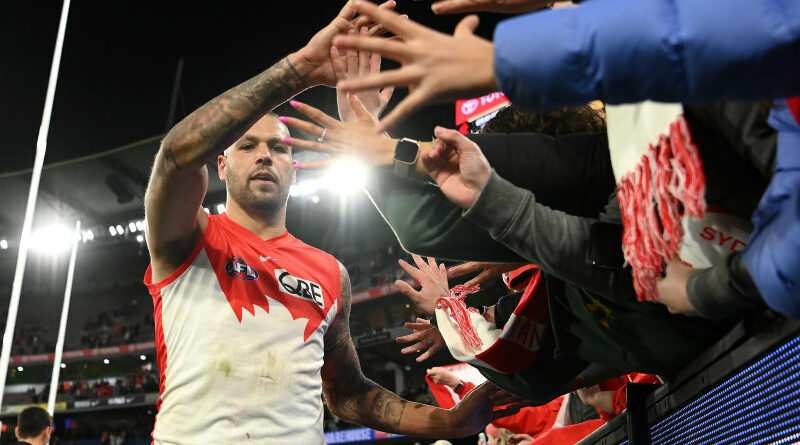 Bayley Fritsch won the battle, but Lance Franklin won the war. The two goalkicking aces had games counterposing their team’s. Yet again, it was demonstrated that the well-drilled team will prevail over the well-hyped.

Thrashed on the night by Steven May, Franklin’s most telling contribution was unwitting. Christian Petracca smothered Franklin when playing on from a free kick in the first quarter, but in the act suffered a leg injury. He played the match out with limited capacity, and there was a knock-on effect through the Demons’ midfield. Fritsch had the first chuckle, but Franklin and the Swans had the last laugh. 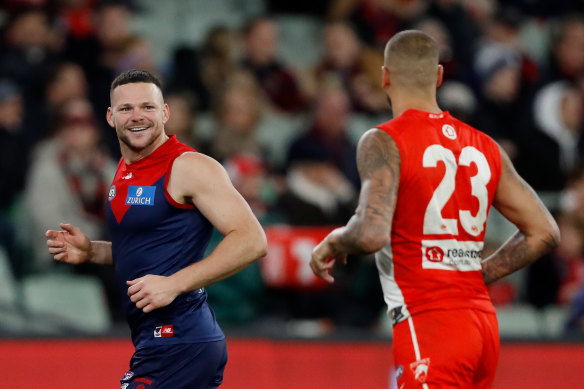 Steven May came out on top against Lance Franklin but the Swans won the game.Credit:AFL Photos

You could say this was a 50-50 face-off. Each had kicked 50 goals for the season, each was his team’s leading goalkicker. But their fates would diverge momentously.

Fritsch’s night started with a classic finals mini-drama. While Melbourne warmed up, he was hustled back into the rooms for medical appraisal, evidently for knee soreness. He missed the national anthem that is performed before every final for no apparent reason and was cleared to play minutes before the first bounce. A Max Gawn hug marked the moment.

Once the game began, it was as if he was out to prove himself doubly. He laid one big tackle, kicked Melbourne’s first goal, handballed to Charlie Spargo for another and led intelligently for Spargo to kick his second after the quarter-time siren. Here in miniature was the Fritsch of last year’s grand final, a clear and ever present danger. All was well in Demonland then. 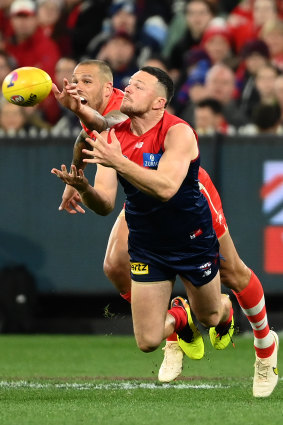 Steven May marks in front of Lance Franklin.Credit:Getty Images

Franklin, meantime, was in the wars. Whereas Fritsch benefited from working around three big forwards – ruckmen Gawn and Luke Jackson ranged upfield menacingly – Franklin was Sydney’s big forward. Once he would have relished this, but that was then. The only statistical category he would lead this night was his age, 35.

Three times in the first quarter alone, May cleanly outmarked him. It would become a motif on the night. Of the Franklin of old, only a tributary was apparent. Only after a mistimed Melbourne interchange did he slip May by enough to get his first mark and kick.

Before that, though, he had made a mark of a sort. Playing on from a free kick, he ran slap-bang into Petracca, who in the act of smothering the Swans forward copped a boot to his leg and would hobble through the rest of the evening. Evidently, the Demons’ assessment was that he could run it out.

When Franklin did impose himself in the second quarter, it was in an old-fashioned way. A clash between him and May 50 metres from the ball turned the ball over to the Swans, followed immediately by another manufactured clash, a 50-metre penalty and a goal for Will Hayward. Two more Swans goals followed as the game changed course. It was Franklin as disrupter.

But when Tom Papley was about to kick for goal moments later, Franklin bundled over May off the ball and the tables were turned. 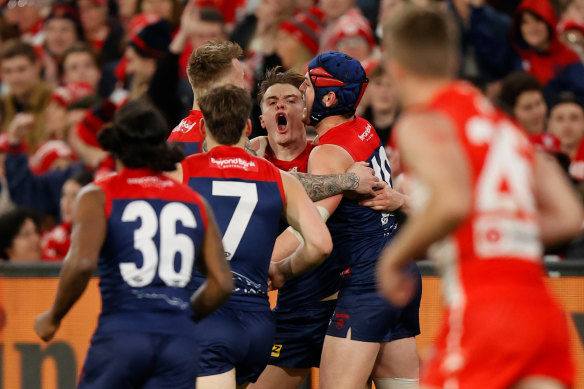 Melbourne’s path to goal was as gazetted, Sydney’s seemingly haphazard and opportunist. When Fritsch reeled out of a pack and snapped a classic natural forward’s goal in the third quarter, one of a run of three for the Demons, the die seemed cast.

But the restriction on Petracca eventually took a toll of the Melbourne midfield’s corporate output, despite the ceaseless efforts of Clayton Oliver, and Sydney’s fleet of clever midfielders and small forwards got to work and took control of the game.

For the second time, Franklin contributed in counterintuitive manner for a kicker of 1000 goals. When he was brought to the bench, the Demons were forced to reorganise and in the meantime, Sam Reid slipped away to mark and goal twice. Buddy as decoy: if it was a ploy, it was masterful.

In the balance of an absorbing quarter of thrust and counterthrust, those goals would be the difference at three-quarter-time.

The Swans rode their momentum and added to it, holding Melbourne goalless in the last quarter. May continued to dominate Franklin as an under-18 might an under-14, but their battle was the game’s counterpoint. Fritsch was forced to roam further afield for looks and kicks. He was frozen out of the game.

May could have done no more, yet finished on the losing team. Franklin, who had just two kicks, was barely sighted, yet by lights out was a winning grinner. Such is footy, so it is finals. 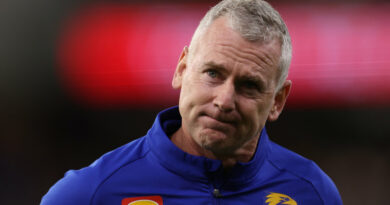 Adam Simpson out as COVID reduces Eagles to 22 listed players