The Bulldogs have left Brandon Wakeham, one of the members of the club’s “Bondi five”, in Sydney and out of the club’s biosecurity bubble which relocated to Queensland after handing down further penalties to the players who disobeyed the NRL’s COVID-19 protocols.

Wakeham, who was a starting half before the incident, has spectacularly fallen out of favour and didn’t even travel with the squad to their Gold Coast hub on Wednesday. It was just a day after he fronted the club’s board for attending an eastern suburbs pub which was later deemed a COVID-19 exposure site. The NRL had put players on notice earlier in that week about attending public venues.

It has called into question whether the Fijian international will play any further part in the Bulldogs’ season, leaving Jake Averillo, Lachlan Lewis and Kyle Flanagan to carry the playmaking burden. Coach Trent Barrett also has rookie Bailey Biondi-Odo in his squad as part of the halves depth.

Wakeham would be required to complete a separate two weeks quarantine away from the squad and unable to play during that time if he was to travel to Queensland later this year.

Wakeham joined Dylan Napa – who is fighting to save his NRL career – Aaron Schoupp, Corey Waddell and Sione Katoa in being hit with undisclosed monetary penalties after marathon disciplinary hearings.

The quintet were subject to an internal investigation, which alleged they visited several nightspots after going to the Royal Hotel at Bondi on the night of their loss against the Eels last month. 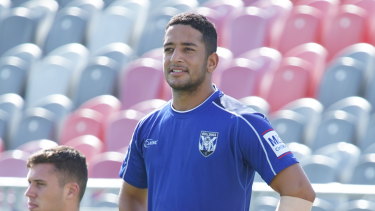 Brandon Wakeham has been removed from the Bulldogs’ biosecurity bubble which travelled to Queensland.

The NRL had warned all clubs to ensure their players and officials avoided the Waverley area at the time, which spawned Sydney’s growing COVID-19 outbreak.

“These players breached the standards and expectations we set as a club and they have been penalised accordingly,” Bulldogs chief executive Aaron Warburton said.

All five players were forced into 14-day isolation periods after a COVID-19 positive case was at the Bondi pub at the same time as the players.

The NRL fined Napa $5000 and hit the Bulldogs with a $50,000 penalty for “failing to immediately notify its playing squad and football staff of additional restrictions that were placed on Sydney based NRL clubs on 17 June”.

The Bulldogs are appealing the sanction.

Napa and his four teammates had to sit out Canterbury’s record 66-0 mauling at the hands of Manly with Trent Barrett forced to field three debutants.

All bar Wakeham returned for the clash against the Roosters on the weekend and Napa, Schoupp, Waddell and Katoa all travelled to the Gold Coast and were named in the 17 to play South Sydney at Cbus Super Stadium on Sunday night.

Napa is in the final year of his deal and is unlikely to be offered a new contract at Belmore.

The Bulldogs have since held talks with Paul Vaughan’s management, who had fielded interest from the club even before the infamous barbecue which resulted in him having his St George Illawarra contract torn up. 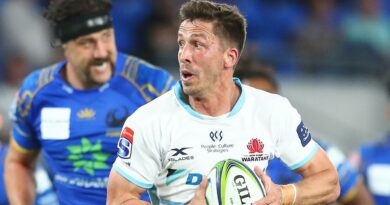