NSW police have taken out a temporary apprehended violence order against South Sydney forward Sam Burgess on behalf of his father-in-law Mitchell Hooke after an argument on Saturday.

Burgess was at Hooke's home near Bowral to visit his children, when tensions escalated and Hooke asked him to leave the property. An argument broke out as Burgess left the property and police were called to Hooke's home. 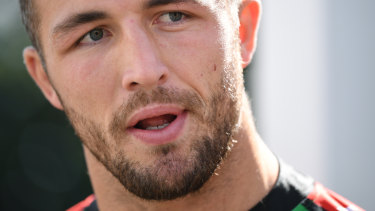 Sam Burgess will have to front court next month.Credit:AAP

"Police are investigating an incident at a property near Bowral shortly after 5pm yesterday," a police spokesperson said on Sunday."

Burgess will appear in court on November 6 as Hooke seeks a permanent AVO.

The incident comes after it was reported this week that the Souths captain had split from his partner Phoebe for a second time. It is not alleged Burgess did anything wrong by being at the Hooke home without Phoebe there.

Once the glamour couple of the NRL, the pair's marriage breakdown has been headline news over the last 12 months.

They had previously spent time apart after Burgess was embroiled in a sexting scandal – which he was later cleared of – but reunited before having their second child. Reports then emerged that the pair had split again just a month after the birth.

The family drama also comes at a tough time in Burgess' on-field career. The Souths star has already been one of the stories of the NRL off-season, as the Rabbitohs come to terms with the reality that their inspirational skipper may only have one last season left in him due to a chronic shoulder injury.

Souths have moved to allay fears he may not be fit to play in 2020, either, but concerns within Redfern remain.

Despite those doubts, Kangaroos hooker and Burgess' teammate Damien Cook has "no doubt" he will line up alongside the English star when Souths start their season next year.

"I haven't spoken to him for a week or so but the shoulder just needs rest," Cook said at the Kangaroos' Wollongong hotel on Sunday afternoon. 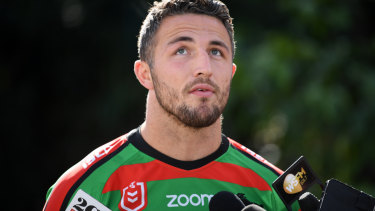 "Sam is probably someone who has probably brought himself back a couple of times early because we needed him back on the field to help us get to the finals. Now he just needs real good rest."

The Kangaroos hooker said he had "no doubt" Burgess will play on but in the same sentence, also warned of the long-term risks the star forward faces should he continue to play through pain.

"Hopefully he is looking after his shoulder and we just want to make sure, first and foremost, his health is there. You don't want any permanent damage to any player after their career," he said.

"Sam has given his whole body to the game and so much to the game so we have to make sure he looks after himself first. I have no doubt he will be playing next year."

The NRL were contacted for comment regarding the Burgess AVO incident.

‘Winning solves everything’: How Cleary clan put long week behind them