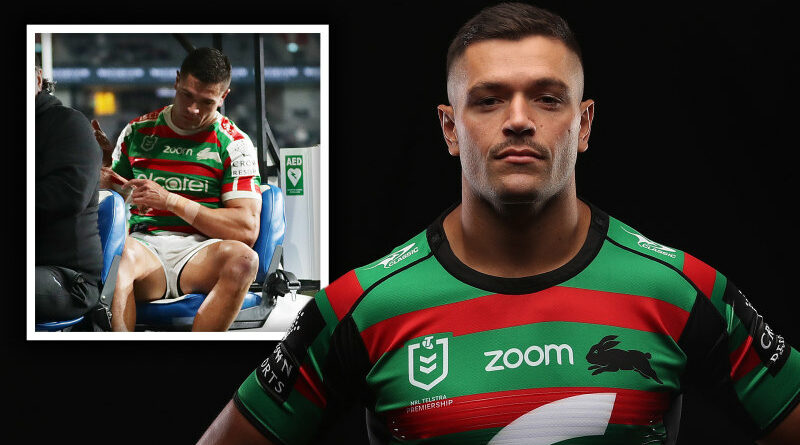 The first thing Braidon Burns feared his NRL career was over when he looked down and spotted his kneecap floating where kneecaps should never float.

Burns has watched the gruesome footage of himself being tackled while playing for South Sydney in their round-eight clash against Canterbury last season when his right kneecap popped out. 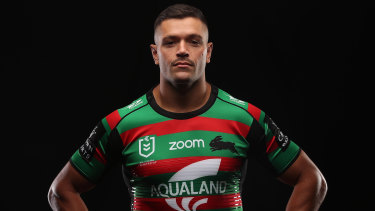 Braidon Burns is back, 305 days after dislocating his kneecap.Credit:NRL Photos

The shocking injury left Burns so convinced he had played his last game of rugby league, he enrolled – and finished – an eight-week course required to enter the NSW Police Academy, a career path he has discussed before.

It was the fourth straight season Burns had been sidelined for an extended period because of injury.

But after 305 days of tears and dark thoughts and gym sessions and rehabilitation and having his spirits lifted by his partner, Tiannan, Burns will make an emotional return to the field for Souths on Thursday night against Melbourne.

Burns has already overcome an upbringing involving his parents spending time in jail and battling drug addiction. The 24-year-old was so relieved when he survived his first game in reserve grade last weekend, he broke down in tears after full-time. 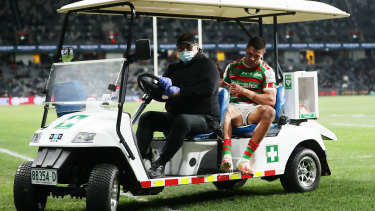 The Souths centre is carted off after dislocating his right kneecap against the Bulldogs last July.Credit:Getty

“When I came off that field last weekend and saw Tiannan, that’s when it hit me that I was back and I was playing again,” Burns told the Herald.

“There were tears. I don’t cry too often in public, but something about my partner, she always brings the tears out. I was so relieved afterwards.

“I actually didn’t think I’d play again. The patellar tendon ruptured off my kneecap, which caused it to dislocate.

“I’ve watched the replay a few times. My kneecap was floating at the bottom of my quad. It was pretty scary. The first thing I thought of was, ‘will I play again?’. Then the physio re-assured me I’d be alright.”

Burns, who battled knee and hamstring issues in previous seasons, convinced himself he would never add to the 32 NRL career games he had played when he exited the Souths COVID bubble last year.

“I was in a bad space mentally after I did the knee,” Burns said. “I left the COVID bubble but stayed in Sydney and chilled at home. My partner was studying to be a nurse, so that came in handy.

“After the surgery I was in a lot of pain and taking painkillers for the knee. I didn’t think I’d come back. I thought to myself, ‘that was it’. I even told Tiannan that it was over.

“I always wanted to be a cop when I finished playing footy. I had a fair bit of time on my hands, so I did an eight-week course you’re required to do before you join the police academy.

“I did that, but the course only lasted 12 months, and it meant I would have needed to join the police this year.

“I started rehab, and once you see a bit of progress with the knee, and you get around your teammates, your confidence picks up, then it gets easier.”

Burns was given a round of applause in the middle of Erskineville Oval last week when his teammates became aware he was finally about to play again.

His shot against the Storm came about because of injuries to Campbell Graham (hand) and Jaxson Paulo (thumb).

With just 50 minutes of rugby league under his belt, Burns will be tested in the centres against the defending premiers.

Burns is off contract at the end of the year. He knows he needs to string some games together before Souths or any other club will offer him another deal.

For now, he is just happy to be back. Expect tears after full-time.

Viney’s ‘stack’ adds to Demons injury woes, as May waits till June