Caleb Daniel has capped off a remarkable season winning the Charlie Sutton Medal at the Western Bulldogs best and fairest count held on the Gold Coast. 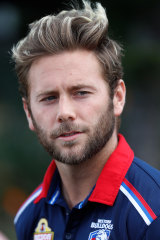 It's the first best and fairest award for the 24-year-old who was also named an All-Australian after an outstanding season across half-back.

He edged out skipper Marcus Bontempelli who has already won three best and fairests at the club and Tom Liberatore was rewarded for a brilliant season finishing in third place despite not playing in the first two games.

Daniel's decision making and kicking are admired across the competition with his precise skills launching Bulldog attacks from defence. His coach Luke Beveridge said Daniel had been a driving force in the club since being selection 46 in the 2014 national draft and become an 'iconic' player in the AFL.

Jack Macrae finished fourth in the count while defender Bailey Williams showed how much he had improved this season to finish fifth. Williams was one of the team's best in their elimination final loss to St Kilda at the Gabba on Saturday.

Alex Keath, Bailey Smith, Tim English, Lachie Hunter and Mitch Wallis rounded out the top 10 with Keath having an impressive first season after crossing from the Adelaide Crows.

Hunter's ninth placing was remarkable given he played just 10 games for the season after receiving a club-imposed suspension of four weeks when he crashed into parked cars in Middle Park during the season shutdown when he was allegedly affected by alcohol.

He then took time off mid-season to freshen up mentally.

The Bulldogs were disappointed to lose their second elimination final in succession and will be looking to bolster a forwardline that struggled to score in 2020 with their leading goalkicker Wallis the only consistent threat inside 50 this season.

Julian Nagelsmann Leipzig to be 'very aggressive' against Man United
We and our partners use cookies on this site to improve our service, perform analytics, personalize advertising, measure advertising performance, and remember website preferences.Ok