Sydney-based NRL clubs lost about $12 million between them in their last available annual reports.

As the frightening reality of the NRL’s coronavirus crisis sets in, The Sydney Morning Herald has analysed the latest financial records of all nine Sydney clubs lodged with the corporate regulator. 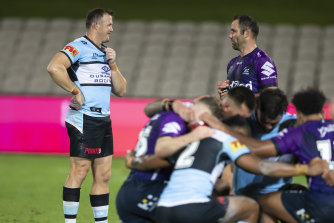 The Cronulla Sharks registered a loss of more than $5 million in 2019.Credit:AAP

That will leave the football clubs little choice but to cut staff and turn their business models around entirely to drastically reduce their expenses.

The other model of running an NRL club is followed by the Rabbitohs, Roosters and Sea Eagles, which are backed by wealthy individuals.

But while the Rabbitohs ($1.22m profit) and Roosters ($8863 profit) have plenty of money in the bank – particularly the premiers – the Penn family were forced to chip in just under $2m to keep the Sea Eagles running in the 2018 financial year.

The arch-rival Roosters and Rabbitohs will survive due to their cash reserves and wealthy owners, but Manly only have one of those to fall back on.

Whether they survive will all but certainly depend on whether the Penns – who have tipped in about $1 million per year since they took over the club to keep it afloat – see the value in propping up the Sea Eagles during what could be their darkest hour.

Manly's 2018 financial accounts revealed the club's dire overall position, which was summarised as ‘‘the company has a deficiency of funds whereby its liabilities exceed its assets by $12.48m’’. It has yet to lodge its 2019 figures.

The Sharks will also have a battle to keep their heads above water given their precarious trading position. The leagues club, which is shut for the next two years for redevelopment as the group takes over Kareela Golf Club, reported $16 million in cash reserves after the sale of land around its property, funds which will be needed to survive the coronavirus pandemic. 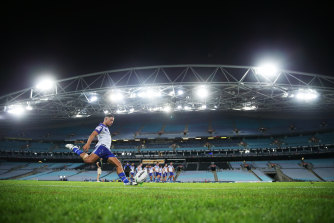 The forced closure of the Bulldogs' leagues club could have a huge impact on the club.Credit:Getty

Analysis: The Bulldogs' football operations stemmed the bleeding slightly in 2019, but still racked up a near half-a-million dollar loss. Of more concern was the huge downturn the powerful Canterbury League Club suffered, falling from a $5 million profit in 2018 to register a $4.47 million loss just 12 months later. The football club's overall financial position is still bleak – it's $2.37 million in deficit – a figure offset by the asset-rich leagues club which reported it had $175 million in members' funds, aided by a $200 million-plus property portfolio.

Analysis: St George Illawarra's complex ownership structure – the company is half-owned privately by Bruce Gordon's WIN Corporation as well as the St George District Rugby League Football Club – makes it difficult to ascertain a full financial picture. The club claiming these figures are confidential didn't help, either. St George Leagues Club traded strongly with a $3.62 million profit in 2019, but a move to drastically reduce its grant to the joint venture was noted. It left the Dragons only $500,000 last year, down from $1.7 million in 2018. The Gordon family's television empire has taken a hit in recent years and much will depend on how far WIN wants to reach into the coffers to keep the Dragons financially viable.

Analysis: The football club simply wouldn't have survived in recent years without its adjacent leagues club pouring in millions to keep it afloat. Again, the football club recorded a multimillion-dollar loss in 2019 despite generating almost $3 million in extra gate receipts from the move to Bankwest Stadium. The overall deficit was even steeper than 2018 ($3.99 million). Financial records show the football club has an $84 million unsecured, non-interest bearing loan with Parramatta Leagues Club, which remains profitable. It chalked up a $2.27 million profit in 2019 and still wields significant financial clout, with $7 million in cash or cash equivalents and $77 million in property and equipment assets. Last year the leagues club listed $10 million alone in football-related expenses, but could be forced to reassess its commitment with the imminent trading downturn. 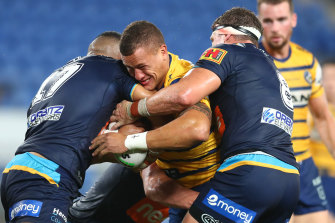 Big hit… Kane Evans of the Eels during Sunday's clash with Gold Coast. Parramatta recorded a $5.25 million loss in 2019.Credit:Getty

Analysis: Penrith's football club shelled another seven figures in 2019, but make no apologies about running the business as a not-for-profit. It was at least a drastic improvement on their 2018 effort ($4.85m loss). Like the Bulldogs and Eels, Penrith's football business is funded by the rivers of gold from its licensed clubs, including $64 million from gaming alone. The Panthers Group almost broke even last term with a $284,000 loss, a steep improvement nevertheless on a $5.24 million deficit in 2018. It has just taken out a $64 million loan to complement $24 million in federal and state government grants for its new western Sydney conference centre, but is still one of the most asset-rich entities in the game. It lists the value of their property, plant and equipment at an eye-watering $208 million, but is already fretting whether it will be able to reopen all its doors after the coronavirus pandemic passes.

Analysis: The South Sydney District Rugby League Football Club – which is 75 per cent owned by Russell Crowe and James Packer – has been on firm financial footing ever since the Hollywood actor and business mogul waived a $7 million loan in 2016. The club has about $4 million in cash reserves available and an additional $4 million set aside for a new high-performance centre. The personal wealth of Crowe and Packer will also be hurt by the COVID-19 pandemic, but the Rabbitohs appear one of the best-placed Sydney clubs to ride out the crisis. 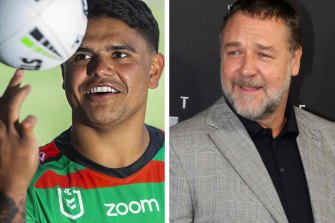 Analysis: Despite basking in the glow of a premiership year, the Roosters' football operation barely washed its face last season and recorded a meagre profit despite registering almost $30 million in revenue. Its overall financial position, though, is just shy of $1 million in deficit. Its leagues club has been astutely run and signed for a $2.76 million profit before tax. The numbers get better though with more than $13 million in cash at hand and a sprawling property portfolio leaving the club with $129 million in reserve. But it hasn't stopped the squeeze on football spending, the annual grant was slashed though to $2.1 million from $3.28 million the year prior. Deep-pocketed chairman Nick Politis' personal fortune has taken a hit, but the club should be well placed to ride out the coronavirus storm. 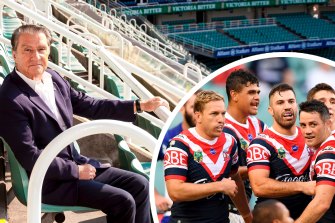 The Roosters remain on a solid footing thanks to the deep pockets of chairman Nick Politis.Credit:

Analysis: The Sea Eagles are one of the few clubs yet to register their 2019 financial accounts, but 2018 makes for uncomfortable reading. The club stemmed the bleeding slightly in 2018 to lose just under $2 million, down from $3.36 million the previous year. It has little in the way of cash or property assets and reported "the company has a deficiency of funds whereby its liabilities exceed its assets by $12.48 million". Its 2018 records also state it owes the NRL $2.4 million. The Penn family is believed to have forked out about $1 million per year on average to keep the club operating and it will need a huge commitment from its private owners – or a white knight – to survive the financial fallout.

Analysis: Long considered one of the NRL's financial strugglers, Cronulla's football club has been beset with money woes for years. It racked up almost $6 million in losses in 2019 and faces an overall $7.71 million black hole. Without the ongoing support of its leagues club entity it wouldn't exist and also had to deal with the NRL's salary cap fine last year. The Cronulla-Sutherland Leagues Club finished the last financial term with a $3.19 million operating deficit itself, but can boast $16 million in cash reserves and $30 million in total equity after selling off more property around its complex. After the reporting term it also secured another $12 million for selling airspace rights adjacent to the leagues club, which is closed for two years for redevelopment. While it may have cash reserves now, the group is asset poor compared to other NRL clubs and their backers, and will trade out of Kareela Golf Club after an amalgamation was finalised late last year. While it has money in the bank it is still a concerning time for the Sharks and their supporters.

Analysis: The Tigers' financial landscape is best analysed through its majority shareholder Wests Ashfield Leagues Club, which provided a $950,000 grant to the football club last year. Wests Ashfield members passed resolutions last year to amalgamate with Balmain Leagues Club and subsequently wiped Balmain's $2.5 million debt to the NRL. It also paid off the $1.8 million the Tigers themselves owed to head office. Wests Ashfield still retains a decent financial base with $3.5 million in cash assets as part of $47 million equity.

Who is Anthony Seibold?

How Premier League players took it to owners and helped the coronavirus cause directly
We and our partners use cookies on this site to improve our service, perform analytics, personalize advertising, measure advertising performance, and remember website preferences.Ok