The Western Bulldogs are preparing for “Operation Max Gawn”, with premiership star Lachie Hunter declaring a physical approach will be debated as one way to stop the ruckman’s match-winning capabilities in Saturday night’s AFL grand final.

As the Bulldogs held their main training session for the week at Optus Stadium on Wednesday, Hunter said the Dogs needed to devise a plan to curb a man who could become only the second ruckman to be a Norm Smith medallist should he dominate. 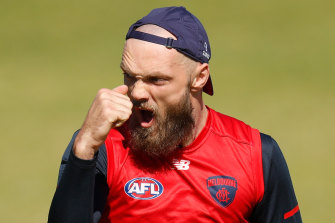 Pumped: Max Gawn is one who the Bulldogs will need to stop in the grand final.Credit:AFL Photos

“I am sure it [getting physical] is an option. It is not something we have spoken about … but I am sure teams have tried lots of different things on him in the past to try and curb his influence, and being physical is, obviously, one of those,” Hunter said.

“You can’t just allow him a free run over the ground at every point and [you need] to make him exert as much energy as you can pretty much at every chance. Obviously, that can limit his influence, at times, but I am sure we will go into a few details on game day.”

Tom Liberatore told The Age last week that hindering Gawn’s run from stoppages will be an important part of the Dogs’ premiership bid, for the hard-running Gawn, once the ruck contest is over, is a master of pushing forward or back to mark depending on which team has the ball, and/or team tactics.

Bulldogs ruckman Stef Martin will be central to limiting Gawn’s influence. The former Demon, nine centimetres shorter than his opponent, is likely to be on the wrong end of the hitout tally come game’s end but his robust, battering style could take a physical toll on Gawn. Martin missed both home-and-away matches between the two teams this season.

Hunter said the Bulldogs were aware of the importance of bumping and blocking Gawn at stoppages.

“Yeah, he has become a really good player at covering the ground as well. From those stoppages, he is really good at getting behind the ball. I think he leads the league in contested marks so, obviously, he gets in some really good positions around the ground,” he said.

“If you nullify him at the stoppage and get in his way there and stop him right as he is trying to start, that probably gives you the best chance of stopping him around the ground with those contested marks.”

The Demons have led the league in scoring from centre bounces this season, but Martin can go some way to ensuring the Demons do not have first use of the ball. In overall clearance wins, the Demons scored a whopping 101 points against Geelong in the preliminary final, a return not lost on Hunter. He also noted why the Demons had dominated that night.

“They had about 16 stoppage goals, which is probably a record,” Hunter said.

“They [the clearances] did come out of the front a lot in the centre bounce. Even if you do lose the centre bounce, if you are able to force them back or wide, then that clearance probably doesn’t land at the top of the goal square. It is a lot easier to defend.

“Max Gawn probably grabbed it out of the ruck a fair few times which pretty much neutralises any of the midfielders and gets it going their way. As much as we can stop that, it will be good.”

The Demons rely on their marking in defence to spark counter-attacks but, if this was curbed, defender Jake Lever has declared the Demons will quickly adjust, backing their ground-ball game to get the job done.

Hunter said the Bulldogs were also prepared to adjust to any unexpected tactical moves.

Key defender Alex Keath (hamstring) had his “final tick off”, confirming his fitness for selection, and Laitham Vandermeer (hamstring tightness) is also set to be available, having trained fully earlier in the week.

The Bulldogs’ match committee now face a selection squeeze ahead of Thursday night’s public team announcement, with Cody Weightman also set to return, having been concussed in the semi-final win over Brisbane.