Des Hasler claims he “can’t remember” the comments on referee Ben Cummins and match officials that have he and Manly facing a hefty fine from the NRL.

Hasler gave a blunt assessment of the officiating in last Friday’s 22-20 loss to Parramatta, declaring Christian Tuipulotu’s tackle on Hayze Perham should never have been punished late in the game, and the 9-2 penalty count allowed the Eels to be “legged back into the game”.

Manly players continued to bag Cummins on Tuesday with prop Josh Aloiai declaring: “I think he did a bad job and we didn’t get away with the win. So I’m pretty unhappy with him, to be honest with you.”

Fronting the media ahead of Thursday’s clash with Melbourne, Hasler moved to wrap up his pre-game press conference before the NRL’s review of his sustained public attack on the officiating was raised.

“I don’t remember what I said, I wouldn’t have said anything controversial that’s for sure,” Hasler said, before claiming the Tuipolotu tackle wasn’t raised in discussions with head office.

“The NRL were very good, we went through the usual steps and the usual processes. We had conversations around that and we were able to clarify everything we needed to clarify without making it public here. I won’t do that. 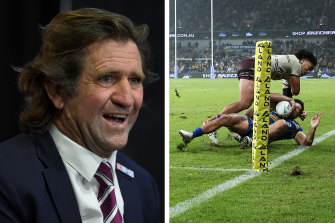 Manly coach Des Hasler is facing a fine for his comments over last Friday’s loss to Parramatta. Credit:NRL Photos

“The only thing that we asked to be reviewed was the ruling and the inconsistencies around the 10 metres and we both agreed on that.“

Hasler has been fined on several occasions and in 2015 famously labelled referees Voldemorts, an evil character from Harry Potter, so he would avoid any sanction for referring directly to whistleblowers.

NRL chief executive Andrew Abdo helped launch Indigenous Round on Tuesday and confirmed they were looking into the comments made by Hasler.

“His comments are under review, so I won’t talk specifically about his comments, but I will talk generally,” Abdo said.

“Everyone needs to take a bit of a breath and show respect for what is a very difficult job.

“I think we all need to move towards being more respectful and more professional generally.

“Respect for match officials and referees is important, not just at the NRL level … we all have a job to do to recognise, respect and acknowledge the difficult job the match officials do. They do a good job.

“They make mistakes from time to time, that’s normal, it’s a professional sport, there are a lot of 50/50 calls that could go either way.

“Our fans are passionate, there will always be debate in any sport, but this concept of thinking referees are deliberately making mistakes, or not heavily scrutinised following the match on an independent basis, is not true.” 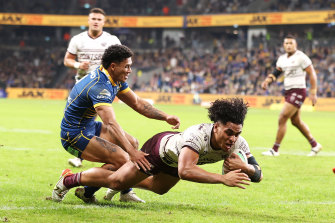 Abdo said it was extra important for coaches and players to lead by example given they were role models for the rest of society.

“They set the example for what happens across fields across Australia at a mass level,” Abdo said.

“There will be decisions that go against you, I understand how much is at stake and the passion everyone has for winning. But I think everyone needs to accept there are things that we do say and can say, and there are things we don’t say.”

Fines for coaches have started at $10,000, but the NRL could come down even heavier in Hasler and Manly, especially in light of the players wanting to continue to question the decision four days after the loss.

Penrith’s Ivan Cleary was slugged $20,000 for suggesting officials had “managed” Canberra back into a game in 2020, a comment that was slammed as “deplorable” by ARL Commission chairman Peter V’landys.

Sources with knowledge of the situation told the Herald some Manly players were so upset with the refereeing at CommBank Stadium they offered to pay part of any fine that may come Hasler’s way.

Meanwhile, the ARL Commission will meet on Wednesday, but a decision on whether to push ahead with a “round zero” match in the US next year will not be resolved.

There is excitement brewing about the 2023 campaign opening in America, with Manly and South Sydney to headline the game because of their Hollywood links to Hugh Jackman and Russell Crowe.

“We’re looking at it, but no decisions are imminent,” Abdo said.

“We have a bit of time because we will need to have done the work by September when the draw starts to get formulated. The next couple of months are critical.”

Magpies get the job done over Melbourne