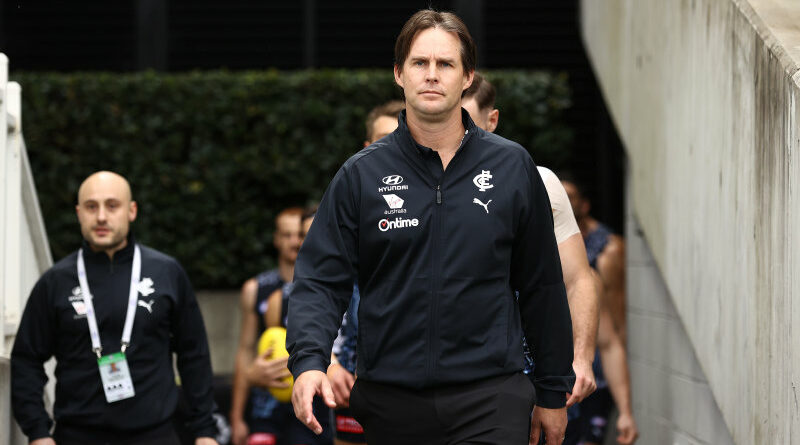 Carlton is set to launch an external review on the club’s football department, which is expected to decide the future of coach David Teague and his assistants.

The club’s incoming president Luke Sayers has been in Sydney with the team, where he has been conducting informal interviews with several senior players and coaches.

The review of the football department, which will be implemented by Sayers and conducted by outsiders, will begin in the coming weeks. 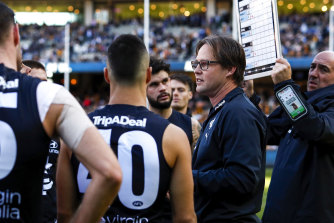 Several board members believed a review would take place at the end of the season if Carlton didn’t make the finals, but that process has been brought forward in the wake of poor results.

While Sayers, the former boss of PricewaterhouseCoopers, won’t technically take over from outgoing chairman Mark LoGiudice until the end of the season, the respected businessman has begun working behind the scenes as Carlton’s 2021 season continues to slip away.

Sayers, who now runs his own advisory firm, Sayers Group, was in Sydney for business reasons, but took the opportunity to meet with several players and staff when the Blues learned their stay in New South Wales would be extended. 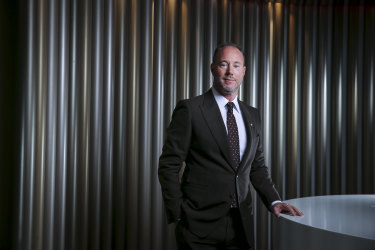 Club sources have told The Age Sayers has met with club captains Patrick Cripps and Sam Docherty as part of his informal interviews.

The Blues have suffered back-to-back defeats at the SCG in the past two weeks, including a demoralising loss at the hands of a significantly undermanned West Coast Eagles.

With four wins from 12 games, Carlton sit 14th on the ladder and have not beaten a team in the eight.

Multiple club sources, including players, have told The Age Sayers has been asking people their opinion on where the club is breaking down.

At least one player has talked about the lack of clarity in the team’s game plan, while another questioned elements of team selection.

Carlton football department chief Brad Lloyd said he would support a post-season review if required, but insisted Teague was safe for next year.

“I am not across exactly what Luke’s plans are when he takes over but I am supportive of whatever is going to help the footy club. Those sorts of reviews, if they happen, if there are things found that help improve the club, I am all for it,” Lloyd said.

He added that Teague, only 40 matches (17 wins, 23 losses) into his senior coaching career, had no reason to worry in a season when the Blues are set to miss the finals for the eighth-straight year.

“We are not going to hide behind the fact we haven’t performed the way we would like, that’s for sure. We would like to execute,” Lloyd said.

“There are a number of areas that haven’t been up to the level – our skills, our contest work and defending. But we have strong confidence in the senior people around the club, including Teague, both on and off the field.”

In launching an external review, Carlton will follow in the footsteps of arch rivals Collingwood, who had leading businessman Peter Murphy conduct a wide-ranging inquest into the club in 2017.

The review found that Nathan Buckley was the right man to take the Magpies forward and that decision ultimately lead to a grand final appearance and near premiership 12 months later.

Richmond, too, reaped the benefits of a review in 2016 when CEO Brendon Gale engaged external consultant Craig Mitchell; an advisor from Ernst & Young.

As a result of the 10-week review, the club employed experienced football boss Neil Balme and restructured the team under him. The Tigers’ success since has been well-documented. They have won three of the last four premierships.

Sayers is expected to call on his business contacts to find the right people to conduct the club’s review.

Lloyd conducted a series of mini-reviews into the club’s football department throughout the 2019 season, but now the club’s board believes an external set of eyes is needed.

Rance ‘not going to completely rule out’ return to footy