Olympic gold medallist Chloe Dalton will return to rugby sevens at the end of the AFLW season in a bid to represent Australia at the Tokyo Olympics.

The Carlton player, who was awarded an OAM in 2017, announced she would be returning to the sport that lifted her to prominence when she was a key part of the rugby sevens side that won a gold medal for Australia at the Rio Olympics in 2016. 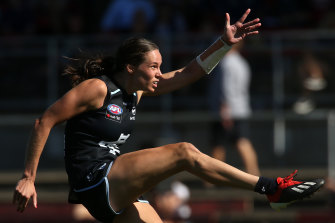 Chloe Dalton in action for the Blues.Credit:AAP

She was then named player of the season in rugby in 2017 before deciding to step away from the sport to have a crack at AFLW.

Dalton joined the Blues last season after playing VFLW in 2018 and adapted to the sport well, playing every game and being part of the team that made last year's AFLW grand final. She kicked a goal in just her second game courtesy of a 50-metre penalty.

However the multi-talented 26-year-old – Dalton played WNBL for the Sydney Flames – could not resist the chance to be part of a another tilt at Olympic gold.

Top Cat the Brownlow medal favourite, but only by a whisker

Coco has nothing to lose in rematch with Osaka