Wests Tigers are yet to land a big-name scalp but have more than $600,000 to spend on a high-profile recruit before June 30 – they just need the right player to come on to the market.

Some Tigers fans have bemoaned their club missing out on Latrell Mitchell and Jai Arrow, who both signed with South Sydney in recent weeks. 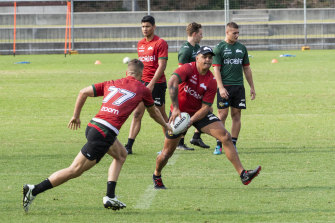 Matt Moylan also refused to leave Cronulla, even though his management later approached the Tigers about a four-year deal, which the club baulked at because of the fullback's injury problems.

Zane Musgrave, Luciano Leilua and Billy Walters are the Tigers' only new recruits, while they have since upgraded young talent such as Tommy Talau, Luke Garner and Alex Twal.

Two more spots need to be filled by season kick-off, plus one more by June 30. The Tigers are still hopeful one spot will be filled by rookie Parramatta prop Stefano Utoikamanu.

A top-quality outside back remains at the top of coach Michael Maguire's wish list. Maguire has always been known for his ability to identify a player's worth and not budge on that amount.

Tigers chief executive Justin Pascoe told the Herald on Tuesday the Tigers had avoided falling into the trap of having to pay 'overs' for quality players.

Pascoe said for the first time in a long time they had the luxury of having cash to splash on decent players when most rival clubs were still juggling their cap for this season and 2021.

"When there are reports we have cap space, every player who comes on to the market is linked with us,'' Pascoe said.

"The great challenge for us in recent months has been balancing that huge expectation from fans who read these media reports, and making sure we're making strategic decisions in regards to adding value to what is already a strong roster.

"Having cap space at this time of year allows us the opportunity to be strategic and leverage of other clubs who might have challenges with their cap space.

"This is a position we haven't been in for four years and it's taken us a long time to get here. We just have to be patient.''

When Mitchell was unveiled as Souths' latest signing at Redfern on Monday afternoon, he said he would have regretted rushing into a lucrative four-year deal on the table from the Tigers.

Pascoe, however, felt Mitchell was referring to money rather than taking a swipe at the Tigers.

Negotiations with Mitchell lasted about a month and were abandoned well before Christmas – and never got anywhere near $1.2 million a season, said Pascoe.

Adam Doueihi was expected to wear the Souths No.1 jersey before Mitchell's signing and has since been linked to the Tigers. Doueihi would be a handy pick-up for the Tigers because of his versatility  but is on a heavily back-ended deal. His pay packet is not one the Tigers are prepared to entertain.

Some Tigers fans have questioned the big money splurged on Russell Packer and Josh Reynolds who have both struggled with injury, while Ryan Matterson felt at the end of last season he was not being paid enough and sulked before being released to join Parramatta. Kiwi international Esan Marsters was also allowed to switch to North Queensland.

The Tigers spent last week in Brisbane where they enjoyed a bonding session with Mbye seen as the early favourite to take over Robbie Farah's No.9 jersey.

Jose Mourinho in trouble at Tottenham after organising training session with stars in park
We and our partners use cookies on this site to improve our service, perform analytics, personalize advertising, measure advertising performance, and remember website preferences.Ok