Club bosses are expected to raise the prospect of adopting the AFL’s model for appointing and removing commissioners at what will be their last meeting chaired by ARL Commission chairman Peter Beattie.

Club chairmen will on Thursday converge on League Central for the first time since the announcement that Racing NSW chief executive Peter V’landys will succeed Beattie at the end of next month. While the clubs are generally supportive of V’landys’ appointment, some have questioned the process that led to his ascent to the top job. 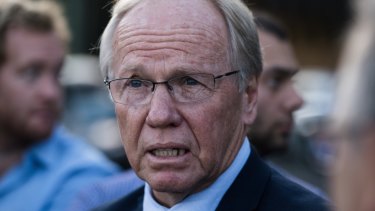 Peter Beattie is pushing for changes to how commissioners are appointed before he steps down as ARLC chairman.Credit:James Brickwood

While the game’s financial performance will be discussed at Thursday's meeting, as well as the prospect of introducing trade windows, the game’s future footprint and an update on the cultural review conducted by Professor Megan Davis, the biggest talking point surrounds the composition of the commission.

Beattie wants his final legacy item to be the scrapping of the rule that prevents club and state officials joining the commission until they have spent three years out of the game. While the move has widespread support, it remains to be seen whether the required threshold of 15 clubs and two states will be met.

The clubs and states want a greater say about who sits on the commission and NSWRL chair George Peponis has put forward a proposal that would give them the power to appoint and reappoint with a 75 per cent majority.

However, some clubs believe rugby league should replicate the model the AFL currently uses. In the rival code, appointments are made with only a 50 per cent majority of stakeholders while removals require 75 per cent to agree. The AFL plan isn’t formally on the agenda but is expected to be raised as part of a wider discussion about the issue of appointments. Any change would be made with a view to ensuring head office has a proper understanding of the issues that affect clubs.

Beattie, who will remain on the commission to assist the handover of power, has been working hard behind the scenes in a bid to push through the constitutional reforms before he steps down as chairman. Another issue he feels strongly about is putting a limit on how long commissioners can hold office.

The meeting is also an opportunity for V’landys to allay concerns about any conflicts that could arise as a result of his rise to chairman. Beattie, who campaigned for V’landys to succeed him, believes the new boss will be better placed to lead negotiations for the next broadcast deal, which is due to begin in 2023.

"They ended up with the right man in Peter V'landys, but they didn't get there the right way," one club chair said.

"We're not comfortable with the process of [the ARLC] appointing their own after a secret meeting to vote him in. What we want is a fully independent commission."

Regardless of the result of Thursday’s discussions, there is a widespread belief that Beattie has fostered a better relationship between head office and the clubs during his tenure.

Shkodran Mustafi can have Arsenal future, says Mikel Arteta
We and our partners use cookies on this site to improve our service, perform analytics, personalize advertising, measure advertising performance, and remember website preferences.Ok