Collingwood are mourning the loss of former club president Allan McAlister, who died on Tuesday aged 89. 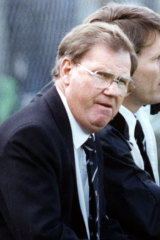 McAlister was president between 1986-95 and famously led the Magpies to the drought-breaking 1990 premiership, his tenure linked inextricably to that of premiership coach Leigh Matthews, a man he declared had the coaching job for life in the euphoria of the win.

McAlister was an outspoken president who dragged the club out of debt and put the Magpies front and centre of every big debate in football and he passionately defended the club at all times. He was also a successful businessman with the Magpie,s enjoying a relatively stable period under his leadership.

McAlister played a significant role in luring Collingwood coach Nathan Buckley from the Brisbane Bears to the Magpies as a player in 1993, with Buckley recalling McAlister on SEN on Wednesday and passing on his condolences.

"It's very sad to see someone who has been such a figurehead at your club pass," Buckley said.

His comments caused a furore, with the club attempting to make up lost ground by playing games in the top end. However, the damage the comment caused to the club's reputation was significant.

McAlister also attempted to upgrade Victoria Park so games could be played there long term and earned ridicule when he came up with a plan to create "Magpieland" in the area.

Canberra’s rise to the top started with hard calls years ago, says CEO

Peter Gulacsi has gone from Hereford United to a Champions League semi
We and our partners use cookies on this site to improve our service, perform analytics, personalize advertising, measure advertising performance, and remember website preferences.Ok