Collingwood will be without key midfielder Taylor Adams for the next month, while the Magpies are unlikely to have giant forward Mason Cox back for Saturday's clash with Carlton.

Adams suffered a tear to an adductor muscle against Port Adelaide on Friday night and the Magpies have estimated that he will miss the next four games, which would mean he would not return until after the bye.

Cox missed the Port Adelaide game with an ankle injury and the view is that he might not be ready to return, which would also mean veteran key-position player Ben Reid would keep his spot for the Carlton game after an encouraging showing against Port. 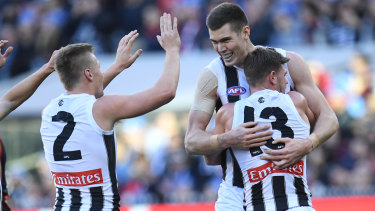 Collingwood’s Mason Cox and Taylor Adams (far right) will both sit out Saturday’s match against Carlton, with Adams expected to miss four games.Credit:AAP

The logical replacement for Adams, based on last year, would be strong and large-bodied midfielder Brayden Sier, who has been missing with a toe injury and is yet to play a senior game in 2019. But Sier's lack of preparation will almost certainly mean he resumes in the VFL this weekend.

Adams clutched at his groin area during the Port game, left the field and did not return as the Magpies went to beat Port comfortably by 39 points.

Collingwood is scheduled to play Carlton, St Kilda, Sydney and then Melbourne on the Queen's Birthday before the bye, which would give Adams a further week's rest before the next game – effectively giving him six weeks between games if he returns in the game after the break.

Reid's return posed the question of whether Collingwood could accommodate Reid, Cox and Brody Mihocek in the same team, or if Reid would need to push one of the other pair out to be selected. Cox, obviously, has the advantage of being a capable ruck support for Brodie Grundy.

The Magpies, while lacking a potent genuine key forward – 211cm Cox is overly tall for one and Mihocek (192cm) is on the smaller side – still lead the AFL for marks inside their forward 50m arc, having medium-sized and quick targets Jordan De Goey, Jaidyn Stephenson, Will Hoskin-Elliott and Jamie Elliott to offset the absence of a gun key forward.

Bennett ‘pissed off’ by feud ‘lie’