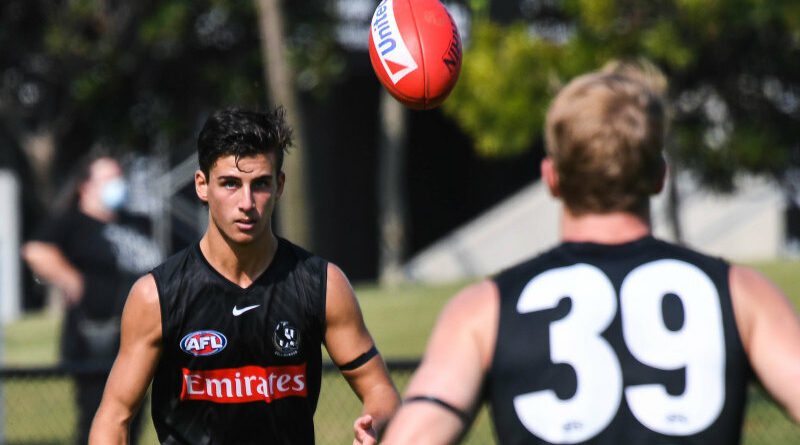 Potential No. 1 pick Nick Daicos has been likened to Greater Western Sydney star Lachie Whitfield after the Collingwood father-son prospect made an impressive debut for the Pies in a VFL practice match on Friday.

Daicos, the son of Magpies great Peter and younger brother of current Pie Josh, is set to be one of the first players taken in the national draft later this year, with a club to force Collingwood’s hand with a bid on the mid-size youngster inside the first handful of selections.

Having not played last season because of the shutdown of junior football in Victoria, teen Daicos lined up for the Pies’ reserves against Footscray, wowing rival club recruiters. 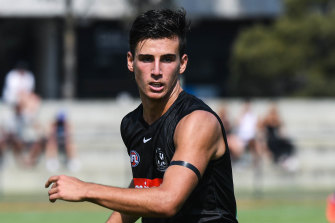 The Age spoke to several recruiters about Daicos, who agreed to share their thoughts on the condition of anonymity.

“The other day, I was super impressed. The confidence and swagger. You’ve got to remember, that would have been the first time he’s ever played a senior match. He’s only ever played school footy and juniors as far as I know. By 20 minutes in he’s taking the kick-outs, he’s baulking blokes out of half-back. Clearly he’s got the skills, but it was more that he’s got a lot more speed than his brother as well. I haven’t seen a 17-year-old kid play with that sort of swagger for a long time,” one recruiter said.

The recruiter compared Daicos to Giant Whitfield, the No. 1 draft pick in 2012 and an All-Australian in 2018.

“He’s played half-back at school and he looked pretty good there the other day. I sort of look at Lachie Whitfield. He was probably a bit similar coming through. He probably doesn’t have the elite endurance of Lachie but just his skills and run, and Lachie’s obviously looked pretty good off half-back, so I wouldn’t be surprised if he starts there and ends up maybe on a wing,” the recruiter said.

The recruiter added that Daicos would be close to getting a game for Collingwood’s senior side now if he was eligible, and that he would also handle the triple-fronted pressure of being an early draft pick with a famous name at a big club.

“He’d be in the mix [for Collingwood’s team now]. On that game, there was a lot of AFL guys playing and in the first half I would have had him in the top few on the ground. He fell out of it a little bit, but he’d be close,” the recruiter said.

“Knowing his personality, I think he’s the type of person that [the pressure] won’t bother him. He sort of plays like he almost enjoys that.

“There hasn’t been any player in the pool that’s been able to do that at this stage, so he’d have to be right up there. If he’s not one he’s going to be two or three [in the draft].”

“His ball use and vision [is] in the top echelon of any junior through the last few years,” the recruiter said.

Live: Players question why they have to take larger pay cuts than NRL executives