If it was possible, Carlton CEO Brian Cook would like to simply tell Blues supporters to trust the club’s new leadership.

Given he has been involved in five premierships and 25 finals series in his 31 years as CEO at West Coast and Geelong, the 66-year-old would be entitled to slam his credentials on the table while forcefully delivering that message.

But he doesn’t, not only because he empathises with jaded Carlton fans, who are more interested in actions than hearing the same well-meaning but now empty promises they have heard for the past decade, but because it’s not the way the calm and composed Cook works. 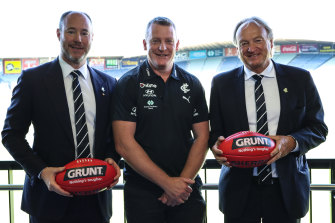 “It’s what you do, not what you say. The members won’t judge us until they see how we perform on and off the field,” Cook said.

That might explain why he didn’t join new president Luke Sayers in declaring finals an expectation for the Blues in 2022 before the Blues appointed new coach Michael Voss on a three-year contract. When asked about Sayers’s comments Cook chuckles with the surety of someone who has been in the caper for a long time.

“I do admire his optimism, I love it. I am not going to be talking against the president on this one. I admire what he said and good on him, he is optimistic,” Cook said.

“To me, it is about being ultra-competitive and taking a step-up in the competition, improving, hopefully winning more games than we lose, and getting respect from all the other clubs.

Cook wants to break the cycle of failure at Carlton that has seen them play finals in 11 of the past 31 seasons and win one flag. The most recent of the club’s 139 finals was in 2013 as they became a club that, despite their membership slogans, never knew whether they were coming or going.

Appointing Voss as senior coach was Cook’s first job as CEO, the veteran administrator drawing on his links with Port coach Ken Hinkley, Cats coach Chris Scott and others to assess the champion player’s coaching potential.

“Vossy stood out as the best leader,” Cook said.

That was what Carlton needed most to replace Voss’s predecessor David Teague after the Sayers-led review into the football department found there was confusion with the game plan and too much emphasis on defence.

The CEO then worked with football manager Brad Lloyd and Voss to assemble a team of assistants that would complement the 46-year-old in his second crack at a senior job after he spent five years as Brisbane coach from 2009-2013. They added Ash Hansen and Tim Clark as well as Aaron Hamill, a straight-shooting former Blue.

“He [Voss] has picked up a hell of a lot in the past seven years at Port and, in particular, the areas around developing culture, directing coaches and how to do that, ensuring the program has a good pattern and a good sequence and makes a lot of sense from Monday to Saturday or Sunday when you play,” Cook said.

“All our coaches are character-first people, and we can build a club around these types of people.”

Unlike his two predecessors Voss is on contract rather than being employed as a staff member, with the Blues reverting to the more traditional model when employing coaches. Sources confirmed his deal lasted until the end of 2024.

Football is the high-profile part of the business but Cook, who has a three-year contract too, has turned his attention to working with everyone at Carlton to redo the Blues’ business plan and reset their values.

Those values lay the foundation for behaviour, which will turn into culture, the expectations and goals made clearer. The role defining and target setting process is already underway but the actions that will lead to sustained success are long-term project Cook will kick off.

Now at a club with a reputation for puppet masters all over the place, Cook has identified a need to streamline the club’s decision-making processes from the board down to how player leadership groups are chosen for both the AFL and AFLW teams. 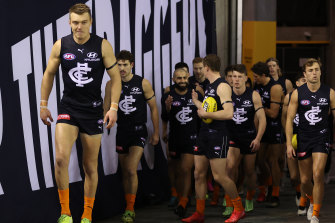 Carlton CEO Brian Cook is reluctant to talk right now about a finals berth for the Blues. Credit:Getty Images

“There needs to be greater role clarity between what the directors are doing and what committees they are on and the executive, so we will address that with the board over the next two or three months to have a more defined structure within our club,” Cook said.

Such a statement doesn’t mean much until the name of club legend Greg Williams is plugged into the conversation. The board’s football director played a hands-on role in repositioning the club post-season before Cook and Voss arrived, having taken over from Chris Judd who was football director in name only in 2021.

Cook admitted having a football director on the board was new to him as he worked with ‘Diesel’ Williams to ensure his value to the club was realised.

“Diesel has been fantastic, and we have had chats about that and how we manage this,” Cook said.

“It’s about how we can get into Diesel’s brain and [access] all his IP [intellectual property] and somehow transfer it to our coaches and him to be open about that. It’s about having a nose in the business mentality, rather than fingers in the business, and that to me is the key.”

An experienced head, directing, delegating and drawing on those around him with equanimity is what Cook offers as everyone looks to see what the Blues are cooking this time around. If there was turbulence before he arrived, with Cook observing that very few employees have been at Carlton for 10 or more years, there is less now as supporters wait to make their judgment.

“There is some optimism out there with the changes that have been made, but I also know that they have lost so many games for so long that they want to see some success on field as well,” Cook said.