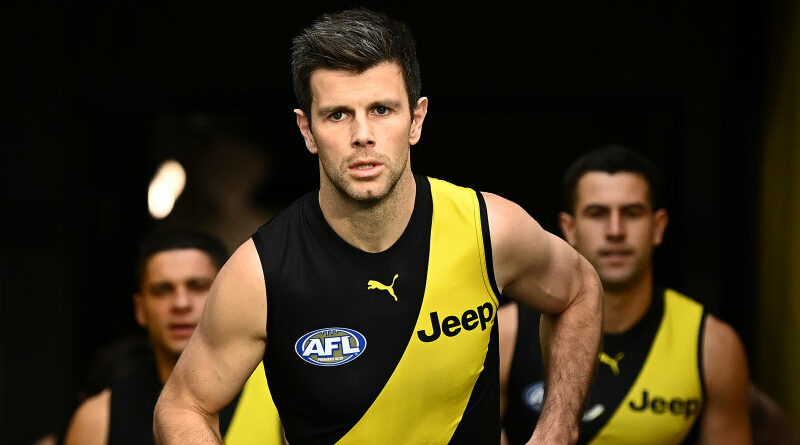 Trent Cotchin has stepped down as Richmond captain after nine years and three premierships.

Cotchin, 31, led the Tigers in 188 matches but Richmond announced on Tuesday night that the Brownlow Medallist had relinquished the role ahead of the 2022 season, which could be his last at AFL level.

“It has been an incredible privilege to captain this club but it feels the right time to step down from that role. The club has built a really strong leadership culture over the past five years and we have some excellent leaders at Richmond that will flourish in the captaincy role. It’s an awesome opportunity to continue our philosophy of pushing leadership deep through the organisation, and for me to continue to play a role both on-field and off-field,” Cotchin said.

Richmond chief executive Brendon Gale lauded Cotchin for what he had achieved.

“Trent has been a magnificent captain of this club over a long period of time – we have been blessed to have someone of his character in the role,” Gale said.

“He is such a selfless leader and this decision underlines that – he has always done what he thinks is best for the team.

“He will still be an enormously important part of our team moving forward and I know how driven he is to see this club bounce back in 2022.

“As a club you are always planning for these eventualities across the business.

“Succession planning has been a key element of our football leadership program and the club will be well-placed to make a decision on the next captain when that time comes.”

“Trent will remain an incredibly important leader for this team in 2022, regardless of his title,” Hardwick said.

“He prides himself on the development of our emerging leaders and he will undoubtedly remain committed to that and moving us back up the ladder next season.”

Eels legend wants back in the NRL after COVID hit

AFLW players need to continue to push the boundaries