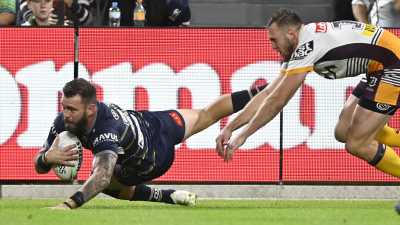 North Queensland continued their march towards an NRL top-four finish with a thrilling 40-26 home derby win over Brisbane.

Two quick tries to begin the second half improved their marginal half-time lead before a late flurry from the Broncos had the sellout Townsville crowd sweating in the final minutes.

The hosts scored two tries in two separate four-minute periods to garner a sizeable buffer in the second half, but when Corey Oates crossed for his second of the game and Selwyn Cobbo charged over from dummy half, the margin was just eight with four minutes to play.

In their final crack in the Cowboys’ half, Pat Carrigan knocked on and from the resulting set Murray Taulagi put the icing on the cake with the host’s sixth try.

The Cowboys have won 10 of their last 11 games and scored at least 28 points in their last nine victories. The win also sealed their first ever 4-0 sweep over Queensland sides since Gold Coast joined the NRL in 2007.

Scott Drinkwater continued his impressive season with three try assists and darting runs from the back, combining with the returning Kyle Feldt to score after six weeks on the sidelines. 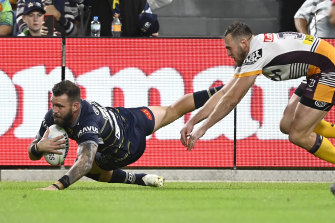 Kyle Feldt dives over the try line for the Cowboys.Credit:Getty

Valentine Holmes moved to the top of the point-scorers list, kicking six from six. The centre also ran for a team-high 153m while Jason Taumalolo was powerful through the middle with 149m of his own.

In the opening half, Brisbane’s defensive resolve repelled a Cowboys attack that enjoyed 72 per cent territory and 26 tackles inside the Broncos’ 20m line.

The visitors were first to score when Peta Hiku erratically attempted an offload which Billy Walters pounced upon. But four minutes later Taulagi intercepted a pass as the Broncos attempted some flair from inside their half to level.

Two Holmes penalty goals bettered the one from Adam Reynolds to give the hosts a 10-8 lead at the break.

Reynolds’ kicked out on the full from a restart and handed the Cowboys two seven-tackle sets in the opening 40.

For North Queensland, their platform was laid through powerful carrying from Taumalolo and Jordan McLean but Brisbane could only be cracked once before the break.

‘Should have been sent off’: NRL great calls for harsh high tackle penalty