Home » Rugby League » Cripps guarantees he will re-sign with Blues 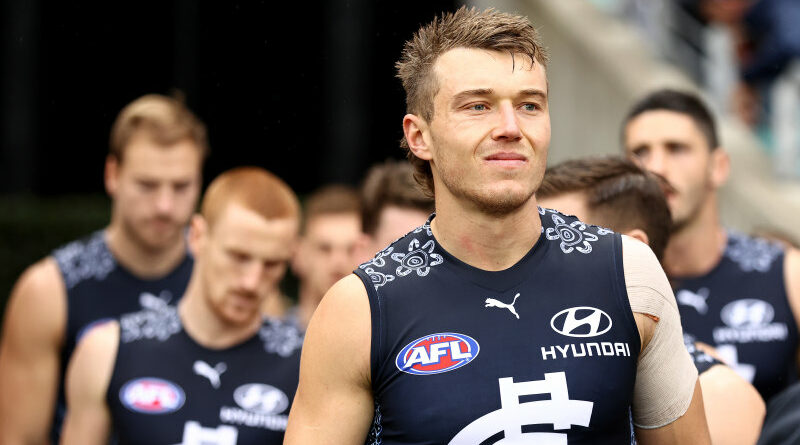 Carlton co-captain Patrick Cripps insists the Blues’ underwhelming season will not influence his decision to re-sign with the club, despite negotiations dragging on longer than expected.

Cripps, 26, his manager Tom Petroro and the Blues appeared close to agreeing to a lucrative four-year deal last month expected to be worth more than $800,000 a season, with the fine print said to have caused the delay. The salary cap for next season and beyond remains unclear because of the ongoing financial toll of the pandemic, with a new collective bargaining agreement needed from 2022 between the AFL and AFL Players Association. 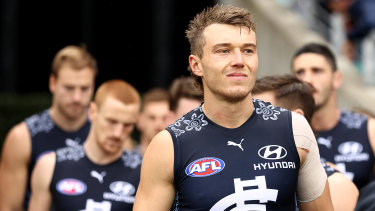 The Blues have been a major disappointment this season. A 4-9 win-loss record has all but ended their finals’ hopes, and an extensive review by external consultants is underway although there is another hiccup because of quarantine issues impacting the Perth-based panel member Matthew Pavlich.

Assistant coach John Barker has departed, coach David Teague is under growing pressure, and there is likely to be more change, but Cripps, a restricted free agent, said he would remain at the club that took him with the 13th pick of the 2013 national draft.

“It’s the same as it was the other day, we are still working through it [the contract]. I have said all along I am happy at the club,” Cripps said on Monday, adding that a losing season had not prompted him to consider heading home to Perth and potentially joining the West Coast Eagles.

“That hasn’t been impacted at all, it never has been. We are just working out a few minor details. Myself and the club are on the same page.”

Asked by The Age if he guaranteed he would remain at the club, Cripps replied: “Yes”.

Despite multiple personal accolades, Cripps has yet to play finals in 131 matches, and is desperate to test himself on the big stage but he will now have to wait at least another season.

Cripps has not had the influence he wanted this season. While averaging 25 disposals per game, he had battled a back injury and is not the contested ball king he was through 2018 and ’19. He booted three goals against the Swans in round 11 but has not been able to become a regular goal-kicker although he feels over “the last five or six weeks I have started to get back to my best”.

Blues’ management said through the summer a return to the finals for the first time since 2013 was expected, but those ambitions are over after a stinging defeat to Greater Western Sydney on Saturday night. That the Blues trailed by five goals at half-time yet were crunched 46-20 to that point in the tackle count even prompted Hawthorn premiership star Jordan Lewis to question whether Teague was capable of motivating his players.

Cripps admitted the Blues were defensively “leaking too much as a side” and it was up to a “collective defence” to change this.

“One thing I would say about this group is that we give effort every week. It is disappointing the tackle count was like that but, at the same time, we were winning the ground ball stat as well. It wasn’t lack of effort, we were still winning the ball,” Cripps said.

“But pressure is definitely something we have to keep addressing as a group. The pressure factor, the tackles, that’s something we will keep working [on].”

Cripps backed Teague to lead the Blues’ recovery, beginning against Adelaide at Marvel Stadium on Sunday.

“When you are in places like this, it is easy to point to one person but footy is collective group and we all take responsibility of where we are at the moment,. It’s not just on Teaguey, it’s everyone. I want everyone to get some feedback from this review,” Cripps said.

Teague, unlike rival coaches Damien Hardwick and Nathan Buckley who also negotiated extensive reviews, does not have a finals record to fall back on but it should not be forgotten Teague only replaced Brendon Bolton midway through 2019 and his two full seasons in charge have been impacted by the mental stress and uncertainty of life in a hub and fixture uncertainty.

Regardless, the Blues’ inability to defend as a team has him under the spotlight. The Blues have not beaten a top-eight side this season and have conceded at least 100 points seven times. Their last win, against Hawthorn in round 10, only came after Teague gave the players the greatest half-time “bake” of his short coaching career.

David King, Teague’s former North Melbourne teammate and now commentator, said on SEN on Monday that defensively “he had never seen a team stick so rigid to a failing plan”.

“This isn’t working, this one-on-one mentality, this refusal for midfielders to defensively compete once the ball leaves clearances … nothing has changed, so if nothing changes on field, something changes off field,” he said.

’What is it?’: New rule in spotlight

Injury worries for Moore, Hurley ahead of finals