Luckless Carlton star forward Charlie Curnow will miss the start of the AFL season as he continues his rehabilitation from knee surgery.

The Blues insist the 22-year-old's recovery from an operation in November to fix a broken patella suffered when he slipped on some tiles is progressing well. 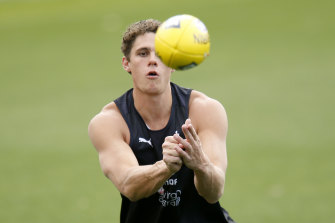 Charlie Curnow won’t be ready for the start of the AFL season.Credit:Getty Images

"With Charlie, we have a really good understanding of what his injury is," club performance manager Andrew Russell said.

"He won't be available for the start of the season [but] we expected it to take a bit of time to recover.

"We'll give everyone an update as he progresses."

The news is a significant blow for the Blues, who finished 16th last year but are eyeing a jump up the ladder in David Teague's first full season in charge.

While the club is unable to put a definite time frame on Curnow's return to the field, he is maintaining a positive mindset.

"I had a meeting with the surgeon and the knee is tracking along quite well," Curnow said.

"We've ruled out the start of the season, which is kind of nice to know. It means I don't have to rush back.

"I can take my time to look after the knee and do all the right processes before I make my return to the field.

"I can't wait to get back on the track and do what I love."

Adding to Carlton's concerns in attack, key tall Harry McKay has been slowed by groin soreness this pre-season.

The Blues open the 2020 season against Richmond on March 19 at the MCG. 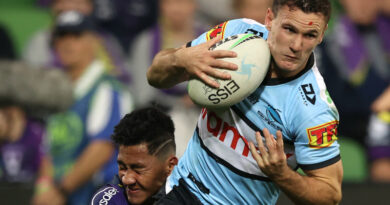