Sydney’s close shave with a COVID-19 hotspot has reinforced John Longmire’s view that AFL coaches and staff are being pushed to breaking point as a result of savage cuts to football departments.

Longmire called for an acknowledgement from the league – which last year forced clubs to reduce their football department spending by a total of $63 million in response to the pandemic – that club staffers were being heavily overworked while trying to service men’s, reserves and, in most cases, women’s programs. 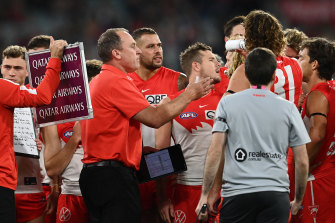 John Longmire has been one of the AFL’s most vocal coaches against the cuts to football department spending.Credit:Getty

“There’s a trim with a knife and there’s a cut with a chainsaw. I’m not sure we’ve got the mix just right,” Longmire said.

Longmire has been one of the AFL’s most vocal coaches against the league’s soft cap reduction, which saw clubs make mass redundancies last year to bring themselves under the new $6.132 million limit – down dramatically from the pre-pandemic limit of around $9.7 million. Many in the game believed the AFL went way too far, and several other coaches have spoken out about the human consequences.

The Swans were last week given a glimpse of what life would be like under further cuts, with assistant coaches Don Pyke, Dean Cox and Jarrad McVeigh briefly sidelined after attending the same cafe in Sydney as a man in his 50s who was contagious with coronavirus.

While the trio were ultimately able to travel to Melbourne for their clash with the Demons at the MCG, the Swans were scrambling to make alternate coaching plans in the absence of Pyke, Cox and McVeigh, with Longmire joking post-match that he had lined up his sons to run the team’s interchange bench.

“I’m not sure what’s skinner than a skeleton staff but that’s what we were on last week,” he said. 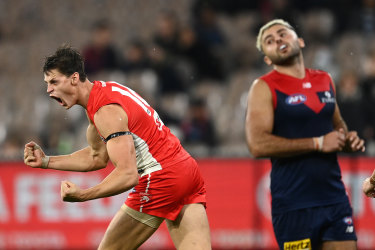 Callum Sinclair celebrates during the tough loss to Melbourne.Credit:Getty Images

“I think the real challenge for the industry is there’s a lot of really good people working but they’re working enormous hours and putting themselves and their families, in some cases, under some stress.

“There has to be an acknowledgement from the AFL that that is the case. It’s not about getting the violin out, it’s just the fact that most people in the industry work six and a half days a week – not just coaches, that’s admin staff. [GM of football] Charlie Gardiner’s workload last week was through the roof.

“We moved pretty well last week, we thought. But the cumulative effect over a period of time can get the better of people and you’ve got to be mindful of that.

“I understand the AFL were doing a review of the soft cap in March, I’m not sure where that’s at, but hopefully [we get] an acknowledgement at some point that it’s tough to expect people to continue to do that week in, week out.”

The Swans fell to the Demons by nine points, with their season ledger now at 5-3 ahead of Saturday afternoon’s clash with Collingwood at the SCG.

Longmire said he expected both Lance Franklin and Dane Rampe, who returned from injury to face Melbourne, would be right to play against the Magpies after recovering well from the weekend.

But star forward Isaac Heeney, who missed with a niggle to the same ankle he had major surgery on last year, is facing an uphill battle and will need to train strongly during the week to be considered for selection.

“It’s just a case of sometimes it gets jammed up a little bit and takes a bit longer to recover,” Longmire said.

“There are times when he can feel it during a game and he pulls up OK and it takes him a day or two to recover. This took a bit longer, last week. It just meant that he had the week off, gives his hand another week to feel a bit better as well.”

The Swans will go in as heavy favourites against Collingwood, having pushed the unbeaten Demons – who Longmire later described as the AFL’s best team – all the way on their own home deck.

“We learned a lot. I think it might have been the highest-pressure game for the year. It was fierce from both teams,” he said.

“Melbourne are obviously playing a really strong brand of footy, contested and strong defensively. We were sort of OK in the pressure stakes as well, so we learned that’s what’s required at that pointy end at the moment, on a wet slippery night at the SCG.

“We had a real go. We’ve got a bit of work to do with some method at different things and they’re always things we can improve on but the effort is the baseline that gives you a good launching pad.”

‘Stabbed in the back’: Ex-Souths boss lifts lid on bitter Michael Maguire and Anthony Seibold feud