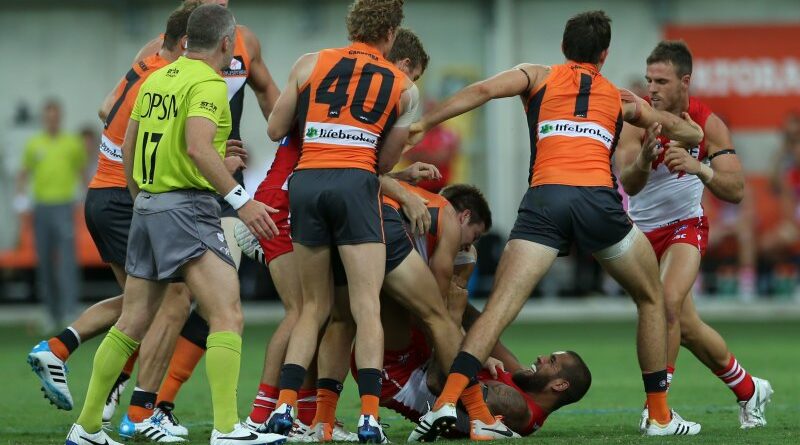 In the first chapter of the Sydney rivalry, the Swans did the thrashing, the Giants the trashing. In the second, both teams walked the walk. We could now be entering a third.

For the first time in the Giants’ 10-year existence, Sydney’s two clubs are at similar points on the premiership clock and heading in the same direction. Yes, they met in September in 2016 and 2018 but the Swans were coming to the end of an era.

It is reflected in recent results. The past two derbies have been won by the underdogs. In late 2019, the bottom-four Swans nearly knocked off the grand final bound Giants.

To borrow an NFL phrase, we may be seeing the Any Given Sunday era of the Sydney Derby, where ladder positions mean nothing.

John Longmire’s men will start favourites on Sunday in yet another derby played outside of NSW but they cannot be considered locks against a Giants team that knocked off ladder leader Melbourne only a fortnight ago.

Both clubs have undergone significant change since they last met in a final three years ago. Lance Franklin and Toby Greene remain headline acts for their sides but there has been a passing of the baton in many other key roles. 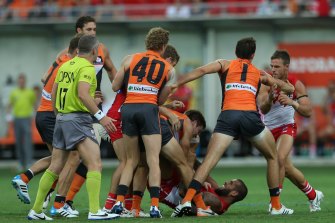 Toby Greene and Lance Franklin (both on ground) during a spiteful Sydney derby in 2014.Credit:Anthony Johnson

For the Swans, Jarrad McVeigh, Kieren Jack and Dan Hannebery are among a host of premiership heroes who have either retired or changed stripes. Foundation Giants Jeremy Cameron and Dylan Shiel have returned home, inaugural captains Phil Davis and Callan Ward are now footsoldiers.

The next generation is driving both sides. Names such as Callum Mills, Isaac Heeney, Tom Papley, Tim Taranto, Jacob Hopper and Harry Perryman.

They weren’t around during the early years when the Swans dominated and the Giants were very good at the niggle, on and off the field.

Sydney players were furious in 2013 when the Giants’ Tom Bugg taunted Ben McGlynn with a “where’s your premiership medallion” sledge after he had missed the 2012 flag through injury.

“When you’ve got a team that consists of Toby Greene, Taylor Adams, Devon Smith and Tom Bugg at 18, 19, you’ll always have some niggle and I’m sure trash talk which I’m sure we used to do quite a bit to be honest,” Ward said. “I don’t think it was ever at the level where it was ridiculous and we had to pull back. Finding the balance was the hard thing. I was never sheepish about it.”

A teenaged Swans fan at the time, Mills did not buy the rivalry, which he felt was manufactured.

“That’s what they had to do when they came onto the scene when they started the Bridge versus Bridge type vibe,” Mills said, referring to the Giants’ insistence on calling the games the “battle of the bridge”.

In a sign the Swans have won that skirmish, the Giants have in recent years referred to the game as the Sydney derby in their public releases.

Mills’s debut year in 2016 was when the rivalry was at its most intense. Tempers frayed in a historic and brutal first final in which Josh Kennedy and Kurt Tippett were felled, Steve Johnson suspended and Shane Mumford in hot water for a taunt about on Franklin’s mental health.

Johnson’s love of the verbal battle set up some awkward moments when he joined the Swans’ coaching staff.

“He used to say everything under the sun,” Mills said. “It was funny coming into the club because he’d said a few things on the field. It’s how Stevie played with his chest out. It was all in good humour.”

The now departed Cameron was another not afraid to trade verbal barbs, which Mills says was accompanied by some “sharp elbows”.

“He’d constantly whack you and say things here or there,” Mills said. “He’s a serious competitor and was always up for those games. Same with Toby.”

The generation gap in the early days meant there was little interaction between both groups of players. There is now more crossover. Taranto and Ollie Florent were best mates as kids.

Their administrators also have a common cause – be it fighting head office in the cost of living battle or, as in the case of now, working with the league to reunite players and staff with their families in locked down Sydney.

“[We’re] not so young and immature as we were back then,” Ward said. “There’s definitely a more personal connection. There’s more to worry about than that sort of stuff.”

Big guns back but Jack Steven out as Cats stay calm