Desperate to find a pulse and keep their slim finals hopes beating, Melbourne turned to a more physical training program in the 10 days since their Anzac Day eve loss to Richmond.

In a season where so much had gone wrong, the Demons may have finally discovered the right method, as they escaped with a five-point win against Hawthorn in what was a slugfest at the MCG on Saturday.

Trailing by 16 points midway through the second term, and by nine at half-time, the Demons produced a five-goal-to-two third term, only to squander the lead, then regain it, to post their second win of the season. 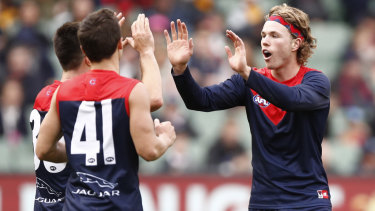 What a day for the Demons. Jayden Hunt (right) enjoys the moment.Credit:AAP

"It was backs against the wall. We haven't been playing anywhere near we have wanted to," skipper Nathan Jones said.

"We put a lot of things in place this week and changed things up. You just focus on the simple things and get back to playing how we want."

Where it had been calamity hour for the Demons in the first half, immediately after the break they began to resemble the side that stormed into a preliminary final last year. They won the clearances and dominated time inside forward 50. James Harmes, sent to Jaeger O'Meara after the Demons had initially opted against a tag, subdued the star onballer, while the indefatigable Clayton Oliver found plenty of the ball.

Hardnut Jones was shifted into the centre bounces at the start of the game, having spent much time on a wing this season, Max Gawn dominated Ben McEvoy in the hit outs, while there were positive signs from struggling forward Tom McDonald after half-time. Importantly, the Demons dominated contested ball – as they did last year – and began to use it better.

Harmes was arguably best on ground. While he conceded two 50m penalties for encroaching on the protected area, gifting the Hawks goals, he snapped the Demons' last goal 20 minutes into the final term. 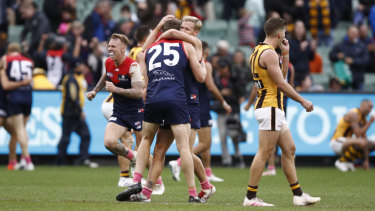 Relief: The Demons won their second match for the season.Credit:AAP

The Hawks booted four goals in the final term but the Demons showed a fortitude that had been missing. This was in contrast to the opening half when they had been bereft of confidence, encapsulated when Oliver and Jake Melksham questioned Jordan Lewis as to why he had not taken possession of a ball in a contest with O'Meara near the boundary. The ball, instead, went over the line. Suffice to say, Lewis did not appreciate the feedback.

The Hawks, typically, fought on and the unheralded Liam Shiels led this charge.

Jarryd Roughead and Lewis were drafted together, are best mates and shared in four flags. But there is one conversation Lewis is unlikely to bring up – his poor kick at half-back 12 minutes into the final term which was intercepted by Tim O'Brien and led to Roughead drilling a long bomb, temporarily regaining the lead for Hawthorn.

It was the old firm which got the Hawks rolling in the first term. Luke Breust and Jack Gunston, so important up forward in their premiership years, combined for three goals, while Roughead produced the play of the day when he stripped Bayley Fritsch of the ball in the middle of the ground and scrambled to chip kick it forward. This led to Isaac Smith carrying it forward before handballing to O'Meara running into an open goal.

Jeff Garlett was fortunate to not be benched in the first term when he opted against handballing to an open Tom McDonald and went for an almost "Daicos-like" shot at goal from the left forward pocket. The ball hit the post, denying the Demons would should have been an easy goal.

The booing of players has been a hot topic since Scott Pendlebury and Gary Ablett heard the jeers for different reasons in recent weeks. Well, it seems the Demons' faithful still haven't forgotten Tom Scully's controversial departure for Greater Western Sydney – after the 2011 season. Now with the Hawks, Scully heard the jeers when he had his first possession in the opening minutes. The Demons' frustration grew when he was involved in two pieces of play which resulted in a Gunston goal but Scully soon faded.

Oliver could well be a future Melbourne captain. And it was easy to see why at half-time when he put his arm around Petracca and delivered what appeared to be some upbeat words, for his teammate had had only five touches, including a botched set shot for goal.

‘We see a lot of negativity’: Tahu calls for tougher action on social media abuse

If Cordner wasn’t concussed in Origin I, the incident needs an explanation