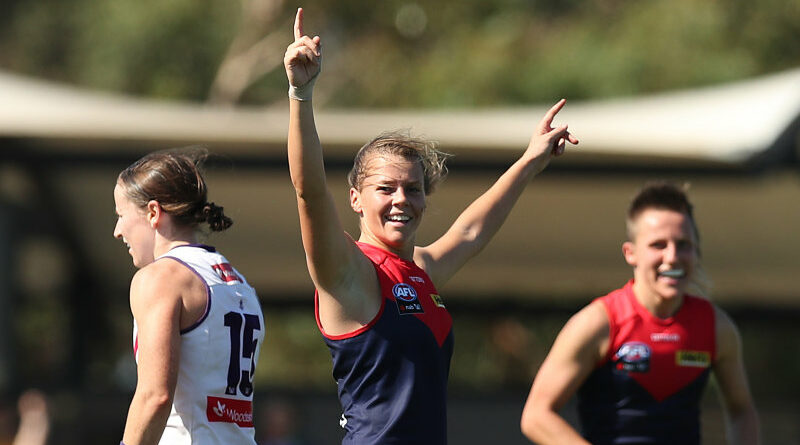 Melbourne made the hot, windy conditions their own to claim an AFLW qualifying final win over Fremantle Dockers at Casey Fields on Saturday.

Despite being without injured skipper Daisy Pearce, the Demons kept their poise in the last term extending a four-point lead via seven behinds before Maddison Gay (19 possessions, nine tackles) capped off a brilliant match with a late goal. 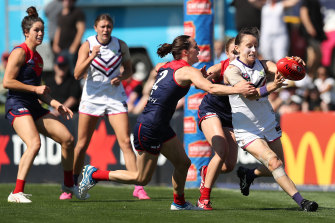 Karen Paxman (20 disposals, five tackles) was her usual consistent self for the Demons winning many a hard-ball while Shelley Scott’s two first-half goals proved telling as did the work of Gay, Lily Mithen, Tegan Cunningham and Eden Zanker.

The Demons will play Adelaide Crows for a place in the grand final next weekend.

Melbourne had all the running in the first half taking a 21-3 lead into half-time after keeping the Dockers goal-less in the opening term despite the wind at their backs.

Two goals to Shelley Scott and a single from Alyssa Bannan had the Demons in charge but considering the first bounce was at 10am Perth time, the Dockers were always expected to be a much stronger side in the second half.

That proved to be true as they stormed back into the contest using the wind to advantage as Ashley Sharp kicked a goal from distance and Sabreena Duffy snapped truly over her shoulder.

Against the run of play the Demons found a priceless goal via Breanna Tarrant who picked the ideal time to kick her first major in AFLW but the Dockers finished the term with 13 inside-50s and found one more goal via Gemma Houghton to see the lead down to 27-23 heading into the last term.

The Demons struggled to kick for goal early in the last but they kept finding enough behinds to take the lead past a goal with two further shots out on the full.

But all those behinds began to add up as the margin passed a goal before Gay earned a free kick and converted just before the final siren.

Whether Pearce is back next week or not, the Demons showed they have the hunger and poise to give the favoured Crows a very difficult contest in next week’s preliminary final.

‘I had my bags packed’: hooker at centre of aborted player swap opens up