Essendon’s 150th anniversary celebrations are being used as a source of extra motivation by the Bombers for Friday night’s blockbuster against Carlton, as the club called in a great from yesteryear to rev up players on the fierce rivalry with the Blues.

Defender Jordan Ridley has declared he wants to do Essendon’s past players proud on a night when every footballer to have ever donned the sash in a senior game has been invited to attend the match.

The two clubs have been in the doldrums for the best part of 20 years but were fierce adversaries in the 1990s and 2000s, culminating in an epic preliminary final in 1999 when the Blues, inspired by Anthony Koutoufides, prevailed against all odds.

As part of coach Ben Rutten’s aim to connect the club’s present with the past, Dons great Ken Fraser addressed players on Wednesday about the rivalry between two of Melbourne’s big four traditional clubs.

Fraser, a two-time premiership player – one as captain – and team of the century member, wrote on the club’s website in 2017 about his dislike of Carlton, which was sparked by a one-point loss in the 1947 grand final and a suspension to goal-kicking legend John Coleman in 1951. Coleman missed the finals, and the Dons lost the decider narrowly to Geelong. 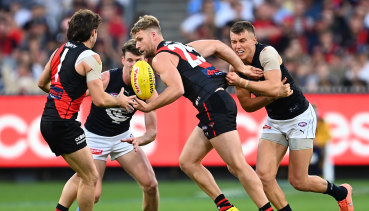 Essendon’s players have been given a lesson on the club’s fierce rivalry with Carlton.Credit:Getty Images

“We’ve had past players come in, we’ve learnt a lot about the Carlton-Essendon rivalry,” Ridley, a Hawthorn supporter as a child, said. “It’s a privilege to play … rivalries like that are what makes it such a good sport to play in.”

Ridley said there was more incentive than usual this week to honour people such as Fraser.

“It’s definitely a massive week for the club and a really good opportunity and privilege to play on a big stage against a traditional rival and really do those past players proud and past successes proud.”

Slammed by their coach and critics for a lack of intensity and pressure, Rutten has brought out the tackle bags and put his players through full-contact competitive training in search of a more robust approach. They come up against a Blues outfit that has become the competition’s midfield beast, winning 10 of 11 contested-ball counts.

“There has been a heightened focus on it the last three or four weeks getting back to that high-pressure contest brand we want to be known for,” Ridley said.

“The numbers probably show there’s been a big difference in our tackling pressure the last three to four weeks. Down back when the pressure around the ball is good it makes life a lot easier. It’s definitely felt that way the last couple of weeks.

“Last week against Port was our highest pressure game of the year. We’re starting to get back to that, which is good.” 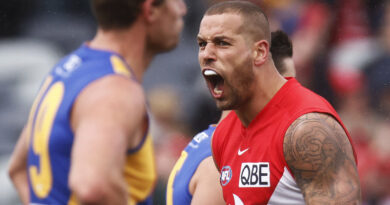 Swans at home at the Cattery, Collingwood earn a Friday night clash

Georgallis refuses to give up on coaching dream