Home » Rugby League » ‘Doesn’t need his dad at the footy club’: A father/son football bond with a twist

Like all fathers, John Blakey wants the best for his kids. This week is the exception.

The professional and personal collide this week for the Blakey family. As North Melbourne’s senior assistant coach, John has spent the week plotting the downfall of his son Nick’s Sydney team.

“You always hope your kid plays well, there’s no doubt about that,” Blakey told The Age and the Herald this week. “I don’t want Nick Blakey destroying us off the half-back line either.” 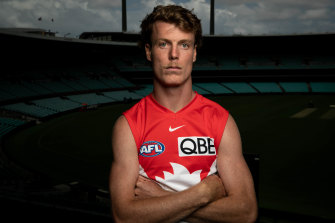 Nick Blakey and his father John are now at different clubs.Credit:Sydney Morning Herald

When two generations of the one family both work in football, situations like Saturday are inevitable. Blakey is not the only member of the Kangaroos coaching panel for whom their family ties have to take the occasional back seat. Senior coach David Noble’s son, John, plays at Collingwood, so too assistant coach Gavin Brown’s boys Callum and Tyler.

The Blakeys have been on both sides of the father/son football fence. Before John returned to Arden Street, where he played 224 games and in two premierships, he served as an assistant coach at the Swans under Paul Roos, then John Longmire for 14 years. For two of those seasons, Nick was a player.

The challenges of such a scenario are clear, though they were navigated without drama. At the time, Nick, still a teenager living at home, was cutting his teeth as a forward so did not fall under his father’s remit as the back-line coach. The two made a pact, John said, to draw a line between their work and home lives.

“It was important to separate the two,” John said. “When we’re at home I’m dad, when we were at work it was work.” 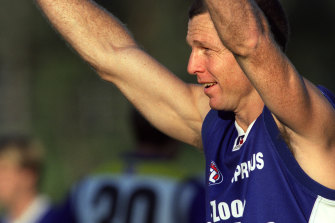 John Blakey coached in Sydney from 2007-20 before returning to the Kangaroos, where he played from 1993 to 2002.Credit:Ken Irwin

Selection can be a thorny issue without the extra layer of family, particularly with Nick not always cemented in the side, though the job of breaking the news to him that he was dropped fell to the senior coach, as is common at clubs.

“For the first few years when I was out of the team a bit it was a bit harder on dad than it was on myself because I knew I just had to go back play well and get myself back into form,” Nick said. “For dad to be in those conversations, I’m not sure how he felt about it.”

John said the issue of favouritism was not one he considered, nor the need to be harder on his son to avoid any perceptions of nepotism.

It would be understandable for a player after being dropped to let off steam and vent about the coaches to their family. This, of course, was not an option available to Nick, not that he is that sort of person.

“I tell you one thing about Nick, he’s very, very honest about his own performance,” John said. “He knows when he hasn’t played well, and he’ll be the first to tell you. He wears his heart on his sleeve.”

John, though, was conscious of giving his son space through his career. When an offer came from the Kangaroos, he took it.

“That’s one of the reasons we came back to Melbourne to let Nick do his own thing,” John said. “He doesn’t need his dad at the footy club all the time, so that was one of the deciding factors in coming back.”

As it turned out, Nick was swung into defence last year by Longmire in a move which has proven a winner for player and club but could have created some awkwardness if John was still on the coaching panel.

“It would have been funny but him bossing me around at home and the footy club wouldn’t have been ideal,” Nick joked.

There was an extra difficulty when the two clubs clashed last year when Nick broke his leg on the eve of the finals. As disappointed and concerned as he was for his son, the hard-edged pragmatism that comes from 37 years at the top level of the game took over.

“When you’re coaching, I’ve got a job to do,” John said. “You worry as a father, you hope it’s not too serious but you understand there are injuries, they’re a part and parcel of it, so you get on and do your job.”

Father and son do not spend as much time together now. There will be no catch-up after the game. John is under health and safety protocols after contracting COVID-19 this week.

“It was different to what it is now but I’m sure there’ll be times we look back when we’re older and think it was pretty lucky we were at the Swans together at the same time,” Nick said.

“To have him living in Sydney and me and him working together at the Swans was really special. Not many, if any, father/sons get to experience something like that. We definitely loved it.” 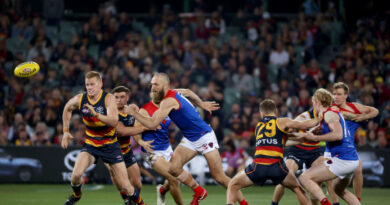