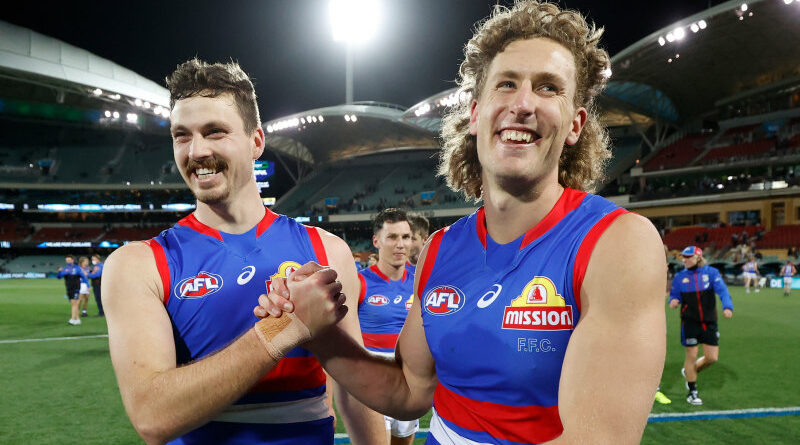 Premiership player Zaine Cordy could be a hard-luck story this time around, with the Western Bulldogs set for a grand final selection squeeze.

While forward Laitham Vandermeer is in doubt for the season decider against Melbourne after hamstring tightness forced him from the ground in the preliminary final win over Port Adelaide, Bulldogs coach Luke Beveridge expects key defender Alex Keath and small forward Cody Weightman will be available after missing the preliminary final through injury. 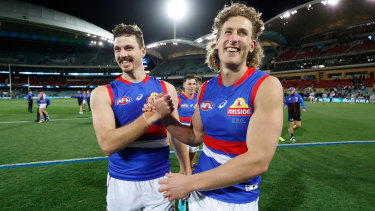 The inclusions of Keath (hamstring) and Weightman (concussion) would leave at least one forced change and two if Vandermeer is passed fit.

Tall backman Cordy – a member of the drought-breaking 2016 premiership team – did a solid job on Port’s Todd Marshall after replacing Keath but it may not be enough to secure a spot after fellow tall defender Ryan Gardner also impressed on Charlie Dixon.

Vandermeer will be assessed over the coming days after being subbed out of the 71-point win at Adelaide Oval on Saturday night.

“He’s a bit tight in the hamstring. He’s got scary history with his soft-tissue, Laith, and our guys thought if he ran any more it was just about to explode,” Beveridge said.

“He definitely feels like he hasn’t had a nasty injury but he had to come out of the game because he couldn’t run.

“So that’s a concern because he’s been important for us. But at the moment he’ll be doubtful.”

Medical substitute Anthony Scott could be edged out of the Dogs’ 23 despite doing little wrong when introduced.

While the selection queries add intrigue, it’s the battle for midfield supremacy to be waged at Optus Stadium in a fortnight’s time that will determine the premiership with Beveridge declaring the looming contest as “an intriguing battle”. 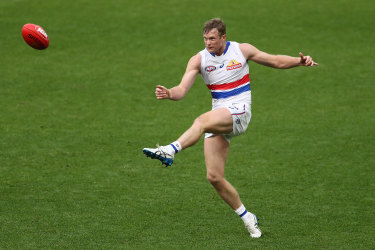 Alex Keath will be available for the grand final after missing the preliminary final through injury.Credit:

After watching his midfield obliterate Port, winning the contested battle by 30 and dominating groundball gets he knew immediately that the crew wearing red and blue that awaits them in Perth will present a bigger challenge.

With ruckman Max Gawn kicking five goals in the preliminary final against Geelong and Christian Petracca, Clayton Oliver and Jack Viney all among the Demons best, they are primed for the contest.

They will meet former Demon Stefan Martin in the ruck with Marcus Bontempelli, Jack Macrae and Tom Liberatore on the front line.

Both Viney and Liberatore’s dads played in 1994 when the two teams last met in a final.

“It will be an intriguing battle against some powerful mids,” Beveridge said.

His respect for Gawn is so high that he called on the football gods for assistance as he thought about what damage he could wreak.

“Hopefully he has got his absolute extraordinary game out of the way,” Beveridge said.

But he knows Gawn plays extraordinary games ordinarily nowadays as the All-Australian captain is the best big man in the competition. 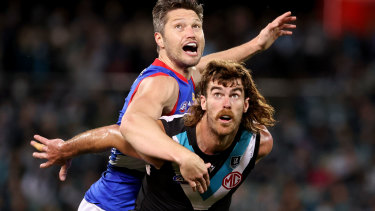 All Beveridge can really worry about is the Bulldogs’ midfield.

They are humming in tune again after sounding something like yobbos singing in the outer during the final rounds of the season.

It meant Beveridge had to re-establish roles, so his talented bunch weren’t all hunting the ball like seagulls scrapping over a sandy chip.

“We have stabilised that and we have been better for it,” Beveridge said.

“They are still playing midfield but they are not in at centre bounces as they were earlier in the year.”

The wing battle will be fascinating with Ed Langdon and Angus Brayshaw the Demon specialists and Lachie Hunter and Adam Treloar on the outside for the Bulldogs.’

Bailey Smith has kicked a lazy eight goals this finals series with only Geelong’s Tom Hawkins matching his numbers, an indication of his skill and the time opportunity he has had to push forward at times.

At Melbourne Alex Neal-Bullen has nowhere near the same flair but he is equally effective, with his spirit and work rate crucial to Melbourne.

Finishing off the battle are Melbourne’s James Harmes and the Bulldogs’ Josh Dunkley, junkyard dogs who love the contest.

It’s where the match will be won and lost. The football world waits.

Bellamy labels 2021 Storm ‘most dominant’ he has coached

Hawks fire up but Power prevails