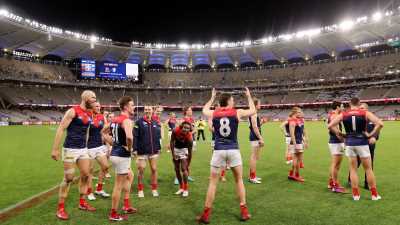 West Coast’s miserable season has taken another turn for the worse despite averting a total annihilation against Melbourne, who continued their unbeaten start to their premiership defence on Sunday.

The 74-point victory – the Dees’ highest winning margin over the Eagles – may have come at a cost for the flag favourites, who lost midfielder James Harmes to what appeared to be an upper leg injury in the final term. 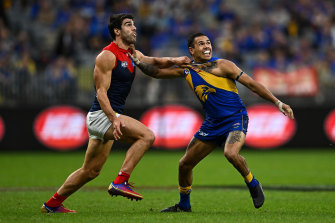 Christian Petracca of the Demons and the Eagles’ Jamaine Jones vie for possession.Credit:AFL Photos

Harmes was taken to the rooms and re-emerged with strapping to his right thigh, and will be in doubt for next week against North Melbourne.

Youngster Kyle Chandler will also come under the scrutiny of the match review officer for a tackle which resulted in Luke Foley’s head crashing into the turf. There was no double motion in Chandler’s tackle but Foley had his arms pinned and was unable to break his fall.

The undermanned Eagles are in danger of losing high-flying forward Liam Ryan either to injury or suspension after he made head-high contact on Jake Bowey. Ryan chose not to tackle, instead laying a bump on the Demon, who, fortunately, was able to play out the game.

Ryan, though, finished the match on the bench with an injury. Cruelly for the Eagles, any time out will see him miss a rare winnable game for the club against the battling Greater Western Sydney.

It is a mark of how far the league heavyweight has fallen that positives could be drawn from such a heavy defeat at home. Tim Kelly’s improved form was a plus, though they will struggle to compete with so many out. 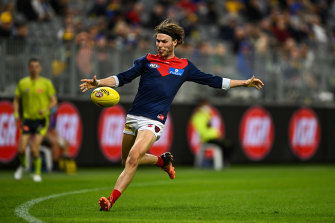 Ed Langdon on the move for the Demons.Credit:AFL Photos

It was not until the final quarter that the Demons, who have won their ninth game of the season and 16th on the trot, put their foot down and blew out the margin in front of a crowd of 27,488.

The Eagles’ performance was a marked improvement but not enough to see them climb off the bottom of the ladder.

There was a sense of the macabre heading into this game, with most interest centring on whether the flag favourites could inflict a cricket-score hammering over the cellar-dwellers.

The TAB set the line at 71.5 points, above the Demons’ greatest winning margin of 70 over the Eagles in the final round of 2000 at Subiaco when they were surging towards the grand final.

The introduction of 50-metre penalties for breaches of the so called east-west rule was designed to encourage teams to play on. Often, teams can pay big price for having a player in the protected zone, even if they do not impact play. So, you can understand the bemusement of Eagles fans when Christian Petracca was in Jeremy McGovern’s protected zone but was not penalised. That turned to frustration when McGovern, under pressure from the Demons star, was pinged for a deliberate out of bounds. To rub salt into the wounds, Petracca converted when it should have been the Eagles launching a forward thrust.

There’s a reason why you cannot trust ruckmen – and it was on show in the first quarter. Luke Jackson’s signature may be eagerly sought but he had a moment he’d rather forget. For reasons known only to the Demons’ grand final star, Jackson kept in play a behind-bound shot from Tim Kelly, then placed Jayden Hunt under enormous pressure on the last line. His dump kick was marked by Eagles ruckman Callum Jamieson, who completely fluffed his set shot. 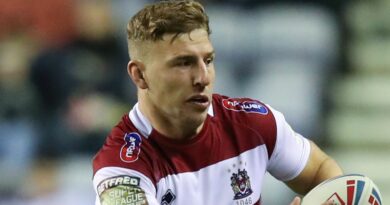