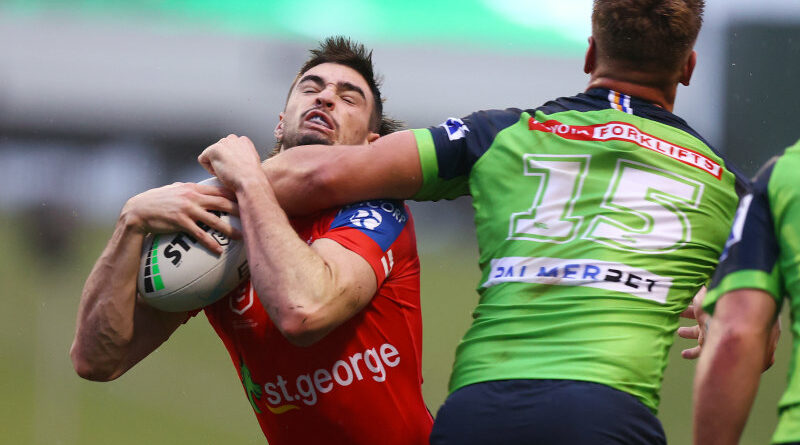 Even after 114 years of top grade rugby league, you can still go to a game every week and potentially see something you never thought possible.

This week’s instalment: a short dropout being swatted back inside the 10 metres to a rival player who scores untouched.

If the game wasn’t so serious — two teams circling the bottom of the top eight and desperately scrapping for two points — Jack Wighton probably would have laughed. He’s never done it before, and won’t do it again.

But it proved to be vital as the Dragons edged closer to a surprise finals berth with a 12-10 win in cyclonic conditions at WIN Stadium, a match which ended in controversy when Ben Hunt escaped penalty for nabbing Tom Starling at full-time from a seemingly offside position at marker.

Wighton, in his first game back since his COVID-19 isolation, had a forgettable afternoon as a southerly bluster reaching 60km/h, after more than 200mm of rain in the previous 24 hours, made for some of the worst conditions imaginable.

As far as State of Origin auditions go, Wighton’s afternoon probably couldn’t have been any worse and ended with a failed attempt to find touch from a penalty with five minutes left. 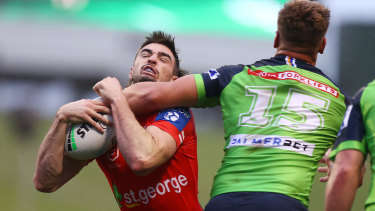 The result vaults St George Illawarra back into the top eight at the expense of the Sea Eagles before a huge clash against the Origin-affected Broncos next week.

The loss leaves the Raiders languishing four points outside the finals spots and needing a run of wins to return to September action.

About 50 fans stood on the eastern hill in the abysmal conditions. Each was offered a free upgrade to a grandstand seat, and yet all decided to perch in the shadows of the ground’s famous wind sock, which blew so violently that if it somehow became detached it would have been found in Sydney by full-time.

On the day when they celebrated 40 years since the inception of the Illawarra Steelers, few of the old legends would have ever seen conditions like Sunday.

Zac Lomax needed hooker Andrew McCullough to hold the ball on his kicking tee when he took a simple penalty attempt from in front, and the first try was one of the most bizarre seen this year.

Wighton deflected a short Jordan Rapana dropout back, but only into the hands of the waiting Junior Amone, who dived over to score. Wighton clearly made contact with the ball inside his own 10 metres, but referee Peter Gough and the bunker deemed the ball crossed the plane before being blown backwards.

Xavier Savage hit back for the Raiders when he slid over from close range, prompting Dragons captain and Dally M contender Hunt to lose patience shortly after and put in a clearing kick after the second tackle.

The biggest blow came just before half-time from one of the biggest bodies, Moses Suli crashing over from a neat Jack Bird ball to give the Dragons a 12-4 lead at the break. It would prove critical.

Despite being held scoreless in the second half, the Dragons held a wind-assisted Raiders to just one Hudson Young try.

Stream the NRL Premiership 2022 live and free on 9Now.
Sports news, results and expert commentary. Sign up for our Sport newsletter. 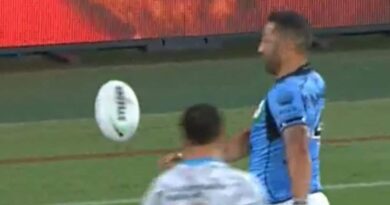