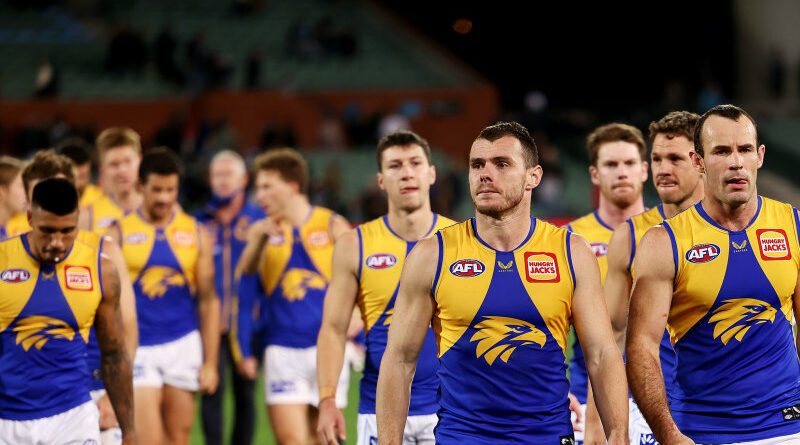 Some of West Coast’s senior stars are set for new roles in the remaining month of the AFL season as coach Adam Simpson enters the biggest experimental phase of his coaching career.

The Eagles (2-15) have little else to play for this year apart from avoiding the wooden spoon. 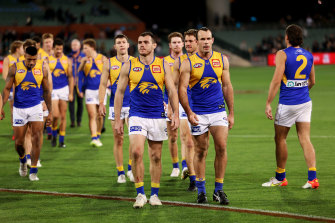 Eagles veterans including captain Luke Shuey could be due for a position shake-up as the club looks to salvage what it can from a horror season.Credit:Getty Images

A host of West Coast’s key players have already been ruled out until 2023, including Jeremy McGovern, Oscar Allen, Dom Sheed, and potentially Tom Cole.

With the side in rebuilding mode and set to hit the draft hard, a number of veterans could be fighting to save their career.

Captain Luke Shuey and midfielder Jack Redden are coming out of contract, while former skipper Shannon Hurn is no certainty to continue on next year despite his strong form.

The club’s injury crisis has already forced Simpson to experiment this year, but it’s set to be ramped up dramatically over the next month.

Shuey, Redden, and Andrew Gaff are among the contenders to be handed new roles in the tail-end of the season in order to give younger players more midfield responsibilities.

Forward Liam Ryan could be given more stints in the midfield after enjoying successful bursts during the club’s 2018 flag campaign, while defender Liam Duggan might be handed an on-ball role.

“Exploring guys in different positions is something we have to look at,” Simpson said.

“Not just first-gamers, but guys who perhaps need to look at something different with their careers as well.

“Those opportunities will come. Maybe not this week, but maybe we’ll try a few different things in the next month or so that will be different in terms of positioning.

“I was actually keen to see (Tom) Barrass forward there for a while and then Gov went down. We actually started to train him up a bit for it and unfortunately we lost a few more soldiers.

“Our hands are tied a little bit, but we’ll try a few different things.”

Naitanui has been sidelined since copping a knock to his knee against Carlton two weeks ago, but Simpson is optimistic the three-time All-Australian will return next week.

“We’re not packing up and going home right now,” Simpson replied when asked if there was any thought of ruling Naitanui out for the rest of the year.

“There’s still five rounds to play. If these guys are available, in particular Nic and Elliot Yeo, I think it’s good for them to play.“

St Kilda will be without star ruckman Paddy Ryder, who will miss four to six weeks with a calf injury. 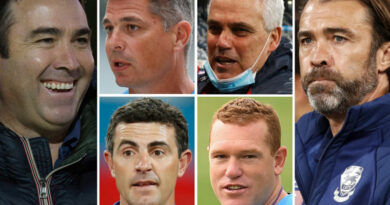 Lyon’s out, so who do the Blues look to now?

‘Sensible course of action’: Fyfe ruled out of western derby